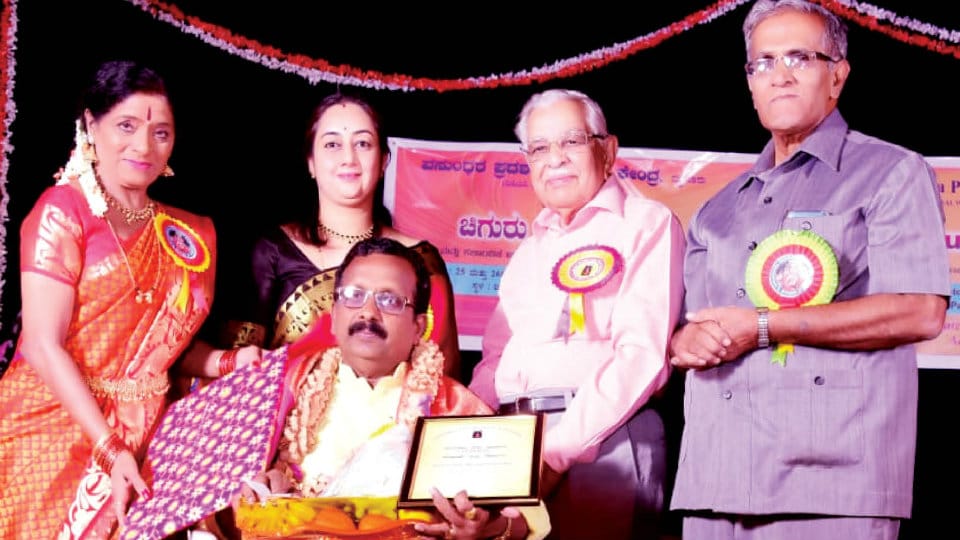 Chiguru Sanje, the annual programme of Vasundhara Performing Arts Centre for the children between 5 and 15 years of age, was celebrated at Jaganmohan Palace on the 25th and 26th of October with grandeur. Two eminent personalities in the field of music and dance — Prof. K. Ramamurthy Rao and Dr. Padmavathi Narasimhan were felicitated on the occasion.

The performance of tiny-tots on both days was colourful and satisfying. Compering of the entire programme was also done by kids under 5 years of age, who did their part beautifully with their stuttering words, bringing smiles on the lips of the audience.

The evening recital on the first day began with Nrityanjali in Ragamalike and Talamalike by the tiniest of the kids. Krishna Kauthuwam in mohana was presented wherein Krishna’s  ‘Kalinga mardana’ was shown. Muttuswami Deekshitar’s good old ‘Himagiri Tanaye Hemalate’ in shuddha Dhanyasi  described Devi Parvati in each word. A very rare padavarna in Keeravani, starting with the charana part as is usually done in Vasundhara tradition,‘Parthasarathi Dashavidha Roopa set to Adi tala was choreographed splendidly wherein Krishna’s birth, his lifting of the Govardhana Hill and Rasaleela were shown appealingly. Devaranama ‘Popu Hogona baro’ by Purandara Dasaru was magnificent with each para describing ‘Seeta Kalyana’ from Ramayana, the game of dice between Dharmaraja and Duryodhana from Mahabharata and the Krishna-Rukmini episode from the Bhagavata included in the sanchari.

To add spice to the concert, a folk dance ‘Kavadi Chindu’ was also included in praise of Lord Muruga in Tamil. The first day’s programme concluded with ‘Antahpura Geete’ by DVG ‘Enee Mahanandave O Bhamini.’

The second day’s recital opened with a set of shlokas in praise of Ganesha, Krishna, Goddess Durga and Sharada in Ragamalika. This was followed by a Swara Todayam in Gambheera Nata. The second one ‘Andal Kauthuwam’ was interesting describing the story of Andal who weds herself to Krishna. Andal is  the only female Alvar among the 12 Alvar saints, known for their affiliation to the Srivaishnava tradition. Andal, who grew up as a devotee of Krishna, wore the garland before her father Vishnuchittar dedicated it to the presiding deity, who later found it and remonstrated her. But the Lord appeared in his dream and and asked him to dedicate only the garland worn by Andal. As she grew up to be a beautiful maiden, her fervour for the Lord increased to an extent that she decided to marry the Lord Himself. The entire story was depicted well by the kids.

The popular swarajati in Bilahari ‘Ra Ra venu Gopa Bala rajita sadguna Dayasheela’ in both Swara and Sahitya and ‘Mamavatu Sri Saraswati’ in Hindola by Mysuru Vasudevacharya were pleasing with elegant postures of Goddess Saraswati. Kannada Padavarna in Ramapriya by Mahesh Swamy ‘Raghuvamsha Chandrane’ was staged in detail by the elder girls of the group vividly describing the Ahalya Shapa vimochana and the Kaushika Yagna Rakshana.’

Javali in Ananda Bhairavi ‘Madhura nagarilo’ specially made for dance expressed Krishna’s troubling of gopikas by stopping them in the streets of Mathura. Tillana in Kamas was good with appreciative footwork.

The Mangalam on both the days was different with ‘Shuddha Brahma Paraatpara Ram’ on the first day and a bhajan in praise of Rama and Krishna on the second.