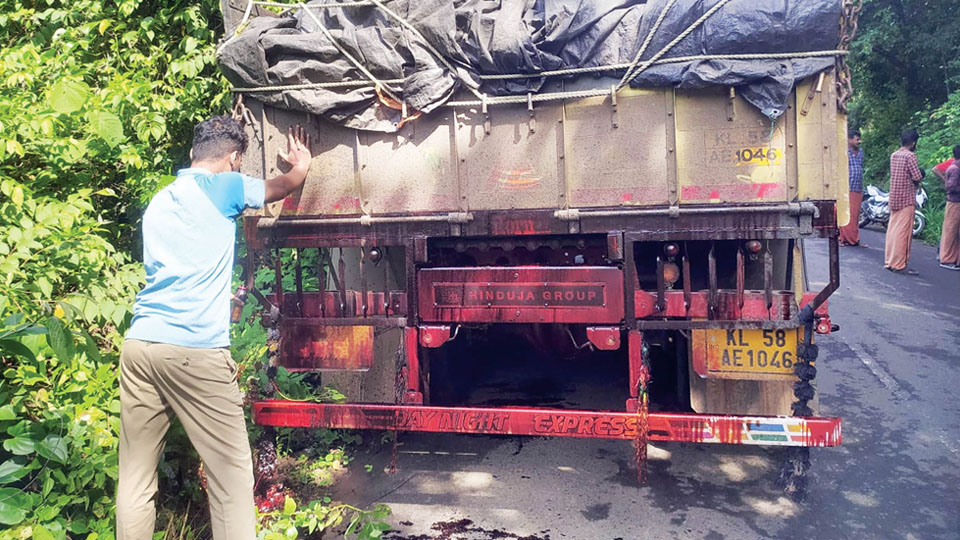 Kushalnagar: Six students from a school at Siddapura were admitted to a hospital as they inhaled the gas mixed with fumes of chilli-pepper sauce concentration that leaked from a truck this morning.

They complained of nausea, cough, breathlessness and severe throat irritation. The lorry was passing through Siddapura from Kushalnagar and was headed towards Kerala through Virajpet. The truck driver and staff inside the vehicle did not notice the leak and the sauce concentration spilled over the entire route from Kushalnagar to the Kerala border at Perumbadi.

The truck was finally intercepted at the Makutta border by the Police, Forest and Health Department staff and it has been seized to plug the leak. The students were given oxygen immediately at Siddapura Hospital and fortunately, the hospital had sufficient emergency stocks.

Not only children, merchants and residents along the route and in Virajpet town too complained of nausea and irritation in the throat. Taluk Health Officer Yathiraj told Star of Mysore that the truck was speeding from Kushalnagar and enough precautions were not taken to transport the ingredient. Many people were found roaming around with masks and were also covering their faces in Siddapura and Virajpet.

“As it was a chilli-pepper concentrate, it had to be sealed and carried across the areas. But we have found that the truck was covered in tarpaulin and the sauce had spilled over from the rear end. Our staff and health officers have reached the spot at Makutta and are examining the truck,” he said.

Alerted by the sauce leak, the District Administration acted swiftly and asked ASHA workers and Health staff to conduct a door-to-door survey all along the route to check if the incident has had any adverse effect. Though teams visited shops and houses on the route, no serious illness was observed.

The students who are in the hospital will be kept under observation till evening and in case they develop further complications, they will be shifted to Madikeri District Hospital, Yathiraj added.