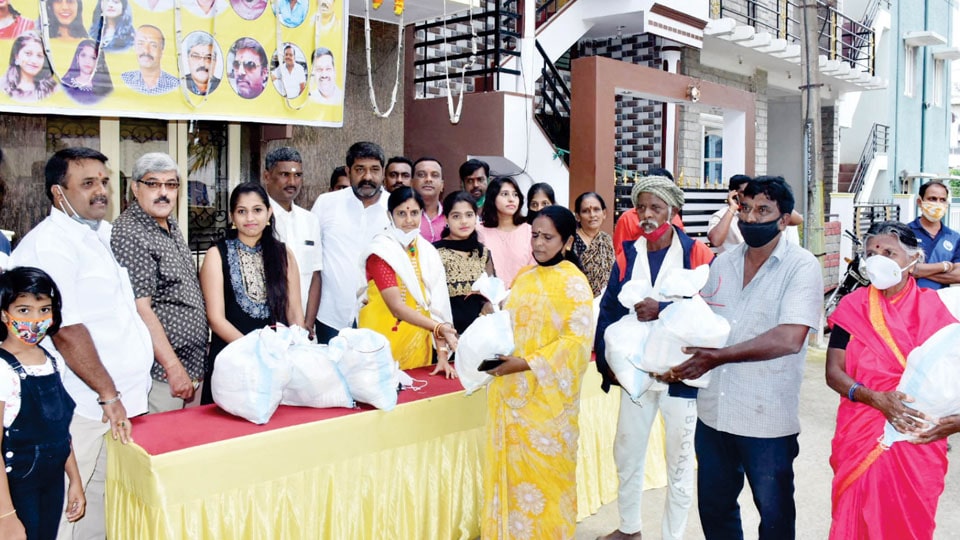 Mysore/Mysuru: About 600 people were distributed grocery kits by MCC Ward No. 22 Corporator Namratha Ramesh, who celebrated her 44th birthday this morning.

Namratha, along with her husband Ramesh, a JD(S) leader and daughters Akshatha, Harshitha and Arpitha, distributed grocery kits to nearly 600 people including labourers, house maids, daily wagers and poor people of the Ward, who were identified and issued tokens about two days ago.

The grocery kits containing rice, cooking oil, sugar, spices, tea powder and other items including sanitiser were distributed in front of her house near Paduvarahalli Park in Narayanaswamy Block here.

The beneficiaries were screened for body temperature before allowing them to assemble in the park. Social distancing was maintained and the organisers had ensured compulsory wearing of face masks and hands sanitised.

Later, 50 Pourakarmikas were felicitated by the Corporator and her family and a silver idol of Ganesha was given as a gift to each Pourakarmika besides distributing grocery kits to them.