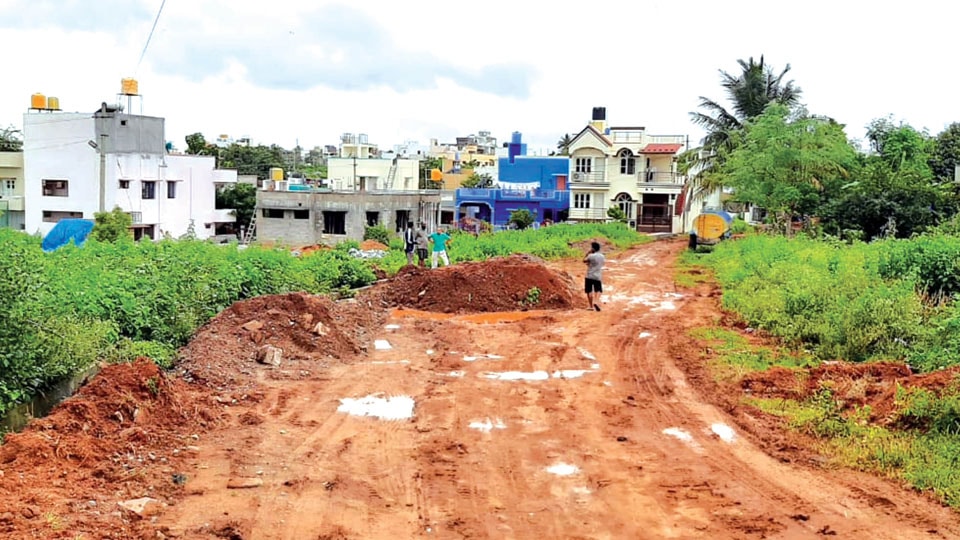 Mysore/Mysuru: Formed in 1997 by the South Western Railway Employees House Building Co-operative Society on a 44 acre land with 640 sites distributed and about 70 percent houses built, basic facilities such as good roads, parks etc. is a mirage even to this day for the residents of Sharada Nagar Railway Layout.

Apart from just one asphalted good area for the layout, there are no asphalted roads and almost all the mud roads in the layout is filled with potholes. There are drains in which sewage water or rain water cannot flow and as the layout is in low lying place, sewage water gets back to houses due to unscientific UGD works.

Rainy season is a curse for the residents as rain water floods the houses and residents have to spend sleepless nights removing rain water from their houses, said residents to SOM.

No parks: In the entire 44 acre land, not a single park has been developed, regret residents.

Shivappa, a resident of the area, said that the place earmarked for parks were filled with weeds, overgrown bushes and plants and also filled with garbage, which has become a safe haven for snakes, insects and other reptiles causing a sense of fear among the residents.

He also said that a woman resident had come forward to spend money from her pocket and get the park developed and added that how much can lone woman spend when the concerned Department which is taking lakhs of rupees as taxes was keeping quite.

“It has been 16 years since I constructed my house at Railway Layout and facing a lot of problems since then. With no proper roads and drains, we feel that we are leading a life in an unknown place. The problems worsen during rains,” said Venugopal, a retired Railway Engineer and a resident of Railway Layout.

Unscientific Works: Venugopal said that a road is being developed from Bogadi village via Sharada Nagar Railway Layout which is being constructed in an unscientific manner and added that the road works would only escalate the problems instead of solving it. He further said that even the drains on either sides of the road are damaged.

Pointing out that when residents question the workers when they indulge in sub standard works, the workers immediately demolish that particular construction, he said that the taxpayers’ money was being wasted.

Road on canal: Residents have expressed doubts that a road was being laid on Dewan Pooraiah Canal which passes next to the Railway Layout and added that a few houses that were built illegally on the canal were demolished a few years ago.