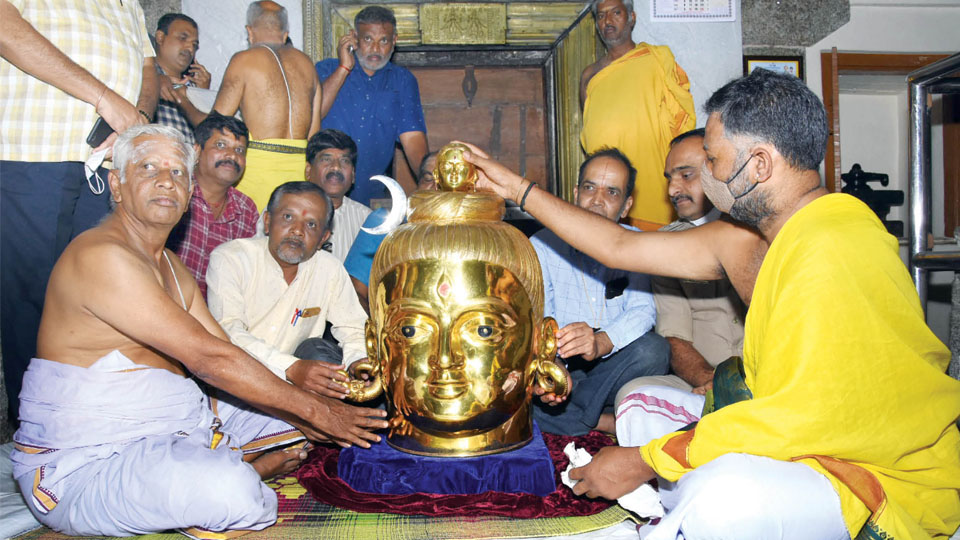 City gears up for Mahashivarathri

Mysore/Mysuru: The city of Mysuru is gearing up for tomorrow’s (Mar. 1) Mahashivarathri festival, a major Hindu festival celebrated in honour of Lord Shiva. It marks the remembrance of overcoming darkness and ignorance in life and the world. It is celebrated by remembering Lord Shiva and chanting prayers, night-long vigil, fasting and meditating on ethics, virtues and values.

Ahead of the festival, the ‘Golden Mask’ (Chinnada Kolaga) was brought from the District Treasury this morning to Trineshwaraswamy Temple in the Mysore Palace premises, where the presiding deity will be adorned with the Kolaga during the festival tomorrow, under the escort of armed Policemen.

After the Kolaga reached Trineshwaraswamy Temple premises, priests checked the Kolaga and all associated jewels following which they gave an acknowledgement for having received them. Chamundi Hill Temple Administrative Officer N.S. Yathiraj Sampathkumaran, Muzrai Tahsildar Krishna and other officials were present.

As there is no permission for holding ‘Jagarane’ (night-long vigil) due to the pandemic, the devotees will be asked to leave the Palace premises after 12 am. However, there will be the distribution of ‘Prasadam’ to the devotees visiting the Temple tomorrow. All the gates of the Palace will be open for devotees.

As a security measure, the city Police have erected barricades around the Temple to enable the devotees to line up in queues for having darshan of the deity. Also, six CCTV cameras have been installed in the vicinity of the Temple to monitor crowds.

The District Administration has permitted the distribution of Prasadam to devotees at all Temples tomorrow. The Police have made elaborate security arrangements around all prominent Temples.