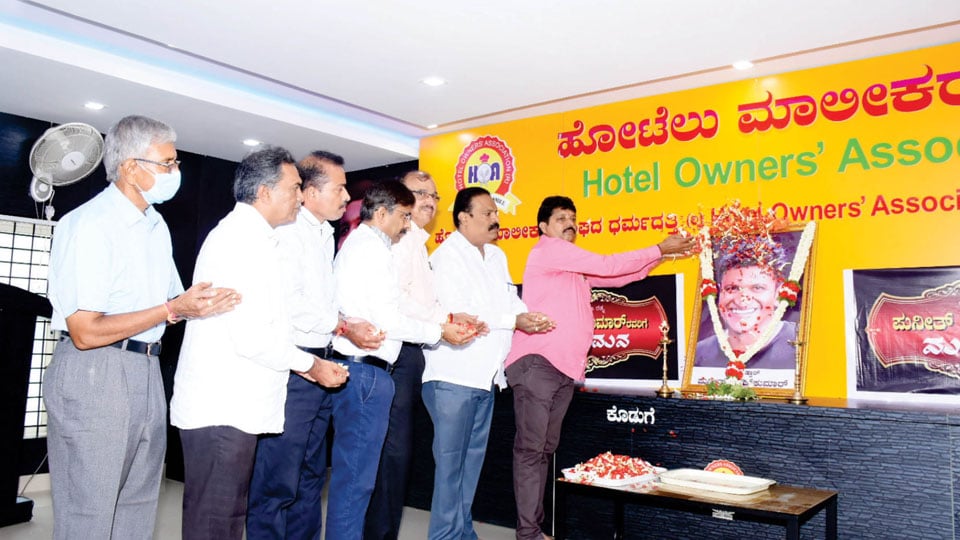 Speaking on the occasion, Association President C. Narayanagowda, who turned emotional remembering ‘Appu,’ as Puneeth Rajkumar was popularly known, said that the Association has paid tributes when great actors like Dr. Rajkumar, Vishnuvardhan and Ambarish and well known personalities from other fields passed away. Pointing out that the sudden demise of Puneeth Rajkumar has come as a shock for crores of Kannadigas, he termed the late actor as an unmatchable youth icon.

Recalling that he saw Puneeth Rajkumar as a small boy at a Hotel in city when he (Puneeth) had accompanied his father, Kannada Matinee idol  late Dr. Rajkumar in the eighties,  Narayanagowda said that Puneeth grew not only to become a great actor, but also a social icon, who engaged himself in social activities.

Association Treasurer K. Bhaskar Shetty in his address, said that the late Sandalwood actor’s contribution to the society is very much inspiring. Pointing out that Puneeth earned name and fame as he grew from a child actor to a versatile actor, doing all roles with ease, he said that the late actor, apart from being remembered for his acting, will also be equally remembered for all his contributions to the society as a whole.

Hotel Owners Charitable Trust President Ravi Shastri said that Puneeth Rajkumar followed the illustrious path of his father Dr. Rajkumar, who is an immortal icon. Pointing out that crores of Kannadigas are sad that the actor passed away suddenly at an young age, he said that Appu’s popularity can be measured by streams of people still visiting his burial site in Bengaluru. Puneeth’s death is a huge loss not only to the film industry, but to the State as well, he added.

Earlier, floral tributes were offered to the portrait of Puneeth Rajkumar.

Marking the occasion, the Association had organised mass feeding (Annadana) in the Association premises, in which about 500 people were provided food and in the premises of Dr. Rajkumar Park near Kote Anjaneyaswamy Temple at the Palace North Gate, where over 1,500 people had food.

Earlier in the day, blood donation camp was held in association with St. Joseph’s Hospital, in which the entire personnel of the Fire Service Station donated blood.

Many other Associations too paid condolence to the late actor by offering floral tributes to his portrait.