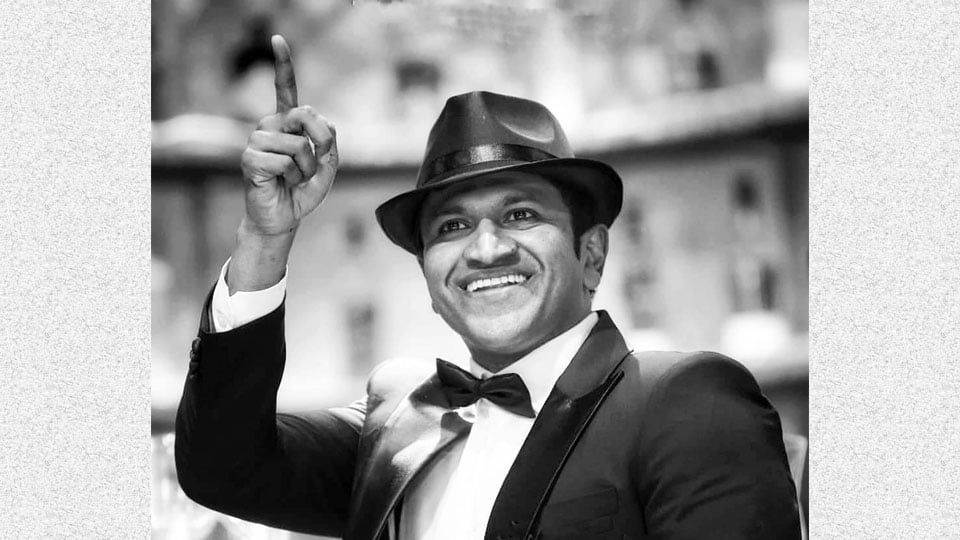 A tribute to an ideal man and a great actor

Puneeth Rajkumar is an inspiration to one and all

Man has developed a superior lifestyle compared to all other life forms. He not only strives for his own survival and economic stability, but he also aspires to possess qualities like status, prestige, knowledge, virtue, socially acceptable behaviour, ability to strive, so on and so forth. Some gain something through legacy. Their forefathers would have accumulated vast amount of wealth for their future generations to flourish on.

Whether they save it, thrive upon it or blow it up and perish is left to the beneficiary. But virtue is not something which someone can earn and transfer it to others. This is not like inherited property, on the other hand it is self-earned. If one is fortunate, luck can be bestowed upon anyone. But professional ability is not easily acquired. A combination of several virtues, result of decades of effort, are drawn into the shaping of an ideal man of the society.

Several years of exceptional public conduct, social responsibility and contact with other associations are involved. Luck acquired through birth may end untimely. But virtue is universal. A testimony for this is popular Kannada film star, Good Samaritan late  Puneeth Rajkumar.

Only people with virtue have the good fortune to live on even after their death. Late Puneeth is one among such few virtuous men. He did not earn crores of fans due to the legacy of his family, instead he earned them with his virtue alone.

He did not get accolades as a hero, social activist or for his brilliant dialogues on the screen. He became a public hero with his real-life support to the lives of numerous people. There is a saying “God can’t be everywhere, so he created mothers.” Similarly, God has brought into existence a few philanthropists into this world. Puneeth is one among such philanthropists who became God to the lives of many through his compassionate charity work.

Earning, saving and improving upon wealth is different from individual to individual. Generally, people with money are respected as affluent in society because the language which the world understands during all times is money. We can register ourselves in the minds of people by gaining respect and popularity with money. It is just a matter of time before such respect fades away. The one who utilises his money for the benefit of the needy public lives on forever in the people’s heart. Such people are not easily forgettable.

The quality of spending a part of one’s income for the service of the poor, needy and the weak is not commonly seen. Richness in wealth is not sufficient, a heart full of compassion is required for that.

Born with a silver spoon into a well-to-do family and youngest in the Dodmane family of Dr. Rajkumar, the kind-hearted Puneeth will remain the unforgettable shining North Star due to his response to the poor in times of their need.

In today’s world blood relatives themselves do not understand the value of relationship. They fight for property and status. To share the bits and pieces of land, small amounts of wealth of the forefathers, they hatch plans and go to the extent of murdering their brothers and sisters with selfish motives.

There are people who start estimating returns even while offering help to others. They would provide help as an investment plan. If the proceeds go as per their plans they grin in pleasure. But, knowing that they are neither relatives nor friends, that he will not get anything in return, if one extends helping hand to others, it shows the vastness of his heart. Some honourable men belong to this class. They  believe that what we give with our right hand should not be known to our left hand. They do not seek any kind of publicity.

Many people donate a thousand rupees expecting fame worth crores in rupees with photos in newspapers. Many others try to build up their popularity by showcasing Government-aided projects as their own by getting their names and photographs exhibited everywhere. There is much for all those people to learn from Puneeth who was younger to them. He became an inspiration to all by liberally donating Rs. 50 lakh for the cause of covid victims. The wealthy people who are called celebrities like our politicians, look dwarfed in front of late Puneeth in the matter giving in charity. Only people with virtue can be compassionate, not every fortunate one.

The work of many virtuous individuals is known to the world only after their passing away. Likewise, Puneeth’s social welfare projects came to light after his demise. The number of fans who assembled to have a last glimpse of him speaks about his charity for the people of this land. If he had gained popularity as a movie idol alone people would not have gathered in such great numbers.

Wealth and fame bring undue pride and arrogance in human beings. Since some are fortunate, they come into the possession of money and name without any effort. But virtue would not be there. Many cinema actors get into murky waters while they are in great heights of fame and become villains in the eyes of the people. Celebrities must be role models to society as there are many fans who blindly follow them. They need to be responsible citizens of the society with many self-imposed restrictions on their public and private conduct.

Puneeth Rajkumar has carved a niche for himself in the homes and hearts of the people that they went to the extent of saying ‘it is enough to have a son like Puneeth.’ Today there is not a single soul that does not brood his untimely death.

It seemed that God was in great hurry to unite Puneeth with his parents. Indeed, Puneeth will remain immortal in the hearts of the people. Truly it is said that those who live in the hearts they leave behind never die.

Silver Lining: Fortune can be measured; Virtue is beyond all measures.