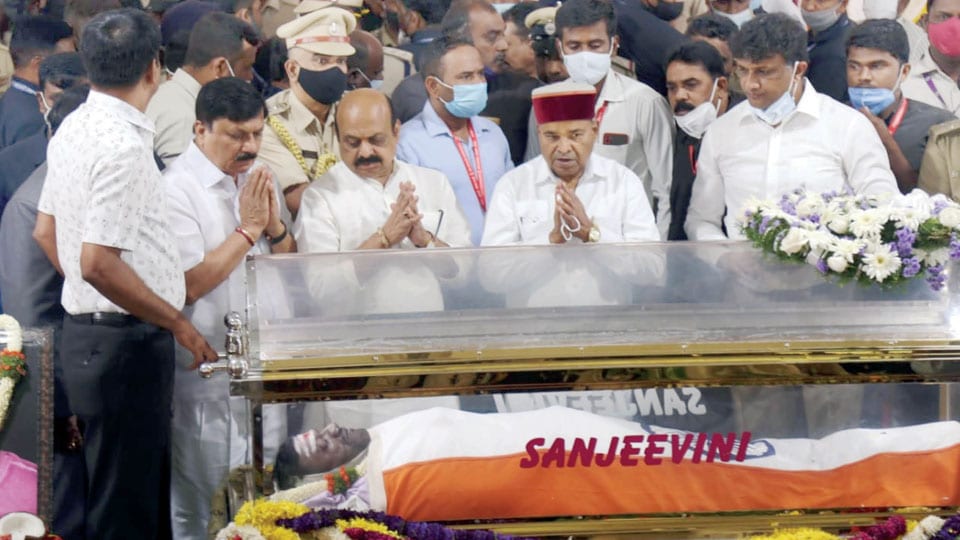 Bengaluru: Shrill cries of “Appu Appu, Yuvarathna, Paramathma” rent the air as thousands of grieving fans are continuing to flock Bengaluru’s Sree Kanteerava Stadium to pay their final respects to ‘Power Star’ Puneeth Rajkumar whose last rites will be performed tomorrow morning at Kanteerava Studio next to the grave of his father Dr. Rajkumar and mother Parvathamma Rajkumar.

Though it had been decided and announced that the last rites would be performed this evening, CM Basavaraj Bommai announced at 1.45 pm today that final rites would be held tomorrow and all the fans would be allowed to have a glimpse of the mortal remains till tomorrow morning. The decision has been arrived at after consulting the family, he added.

Considered as the Kannada cinema’s reigning star, Puneeth, youngest of the five children of thespian and matinee idol Dr. Rajkumar passed away at the age of 46, after suffering a cardiac arrest yesterday. He was a dashing lead in films and a member of an illustrious movie family.

The late actor is survived by wife Ashwini Revanth and daughters Dhruti and Vanditha.

The mortal remains of the actor, wrapped in National Tricolour, have been kept at the stadium for fans and well-wishers to pay their respects. The land where the last rites will be performed is owned by Dr. Rajkumar Foundation and the Government has tweaked the law for the land to house Puneeth’s remains.

READ ALSO  5,000 teachers to be appointed this year: Chief Minister

Governor Thaawarchand Gehlot accompanied by CM Basavaraj Bommai and other Ministers of the State Cabinet were among those who paid their respects today. The CM has appealed to the people to maintain calm and not to lose patience so as to show disrespect to Dr. Rajkumar and Puneeth Rajkumar.

The Government has already announced that the last rites will be performed with full State honours. Bengaluru City Police Commissioner Kamal Pant has issued an order banning the sale of liquor across the city with immediate effect till Oct. 31 midnight.

Puneeth Rajkumar’s daughter Dhruti landed at Indira Gandhi International Airport in New Delhi around 1 pm and she will board the Air India Flight (AI 502 Dreamliner) which is scheduled to leave New Delhi at 1.30 pm and scheduled to reach Bengaluru at 4 pm. Dhruti is the elder daughter of Puneeth who had gone to the US for studies two months ago. After receiving the news of her father’s death, Dhruti immediately left for India from New York on Friday, but the flight was delayed for six hours.

The mortal remains will be taken in a procession from Kanteerava Stadium to Kanteerava Studio tomorrow, where the last rites will be performed. A total distance of 15 kilometres will be covered along the procession route and the entire area would be cordoned off by Police and other security forces.

The Bengaluru Police, Bruhat Bengaluru Mahanagara Palike (BBMP) has made arrangements for the funeral and also to contain the crowd. Only close relatives, some members of film personalities, priests and family members will be allowed to the place where the actor will be laid to rest.

Security has been beefed up all across the State with maximum force in Bengaluru to manage the situation. The Kannada film industry has come to a grinding halt and all movie shows have been cancelled in the State.

Film stars are revered in India, almost obsessively and even natural deaths of movie stars have led to violent turmoil in the past as distraught fans try to come to terms with the death of their idol. The death of Puneeth Rajkumar’s father, Dr. Rajkumar in 2006 also led to outpourings of grief and shutdowns. The Government does not want a repeat of the situation and has taken tough measures.