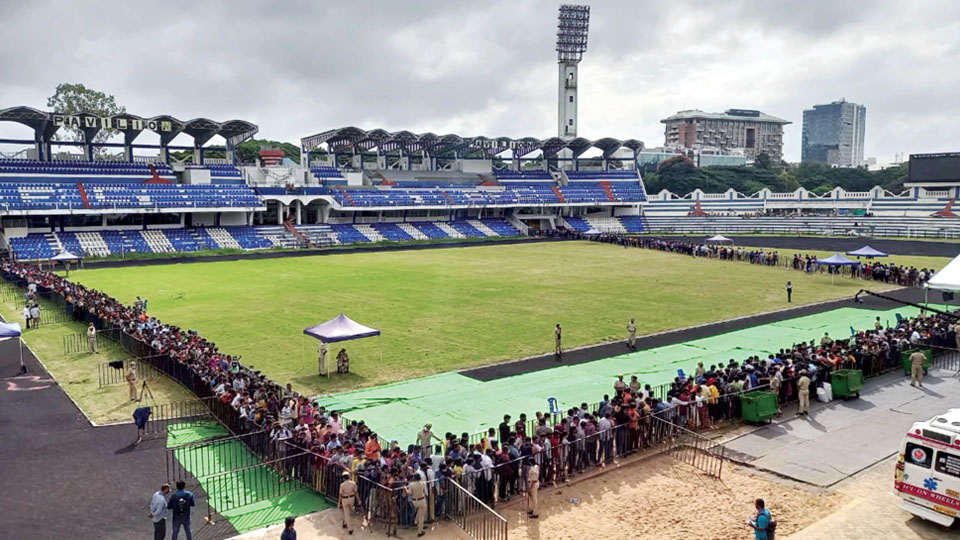 Bengaluru: Kannada actor Puneeth Rajkumar’s untimely death at 46 yesterday has left his fans heartbroken. Thousands of fans have been making a beeline to the Sree Kanteerava Stadium since last evening where his mortal remains have been kept for the public to pay homage.

Bengaluru Police said that the crowd numbering more than two lakh had the last glimpse of the actor last night with more and more fans continuously pouring in from across the State.

KSRTC buses have been carrying fans from nearby districts including Chamarajanagar, Bengaluru, Kolar, Mandya and also Mysuru.

All the roads leading to Kanteerava Stadium and several arterial roads around the area have choked with traffic and heavy movement of fans on foot who have parked their vehicles at far away places to have the last glimpse of the actor.

The Police and security personnel are having a tough time in dispersing the queue as all of them are expressing a desire to be there for some time seeing their icon.

Many of the fans are waiting to get into the Stadium in a collective show of love and solidarity. Unfortunately for them, the man whose warm smile had captured their hearts for decades, is no more and they cannot digest this fact.

Known to be a youth icon, Puneeth’s untimely demise has come as a shock to Karnataka as well as his well-wishers beyond the State. As his body lies in state, his fans are passing by in queues quietly, stunned by what they were seeing.

Several fans were seen folding their hands above their heads and crying in Kannada, “what was the need for you to go so soon” and “46 is not the age to die”. While male population dominated the crowd, there were a considerable number of women and students too in the queue.

Seeing the continuous flow of fans to the Stadium, it was amply clear that his admirers loved Puneeth not only because he was Dr. Rajkumar’s son, it’s also because he carved out his own identity in Sandalwood.

“He’s a very, very good man. I’ve seen him since a young age. He made a name for himself in the film industry. We have only love and faith for him. We are so upset. I haven’t even eaten. We just pray to God that he’s okay. More than a celebrity he was a good man. That’s why we love him,” said a fan.

His acting, dance, dialogue delivery, character, social service, simplicity and humble nature drew fans towards him like a magnet and he took the Kannada industry to the next level. As the entire State is plunged into mourning, his memories will live on in celluloid, watched and rewatched by his legion of fans.