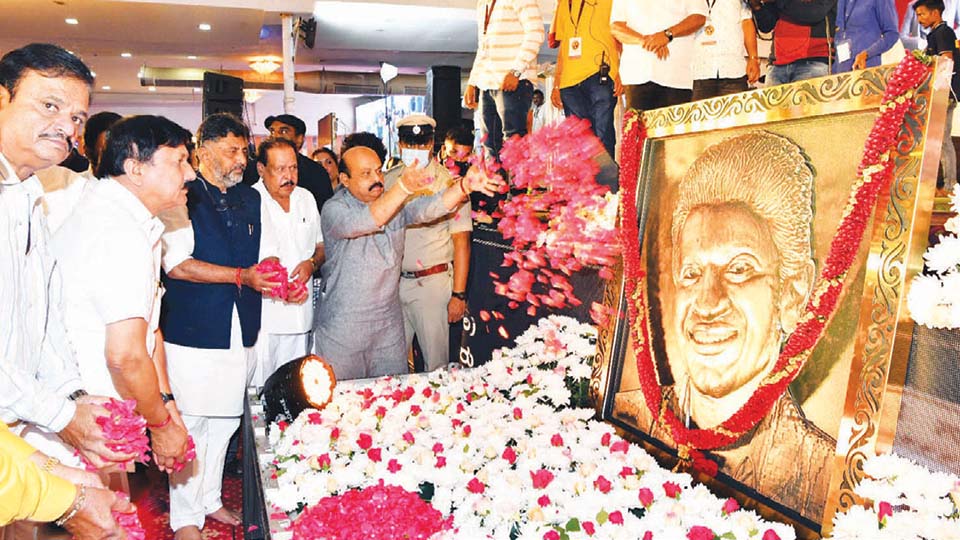 Bengaluru: Many prominent members of the Kannada Film Industry and top leaders of the Karnataka Government convened for a special event in honour of late Puneeth Rajkumar. The event, called ‘Puneeth Namana,’ was organised at the Palace Grounds in Bengaluru to pay tributes and also celebrate his life as a grand retrospect with wife Ashwini and youngest daughter Vanditha too in attendance. Eldest daughter Dhriti left for US a couple of days ago to continue her studies.

Larger than life posters of “Appu”, as the actor was affectionately known, lined the road to the venue. His family members — visibly overwhelmed with emotions — were also present at the event. Puneeth Rajkumar had died of a heart attack on Oct. 29 at the age of 46. The Palace Grounds reverberated with heart-touching songs, emotional videos and poignant speeches dedicated to ‘Power Star.’

‘Puneeth Namana’ was organised by the Karnataka Film Chamber of Commerce (KFCC) in association with the Sandalwood Film Actors’ and Technicians’ Association. KFCC President S.R. Govindu urged all fans to cooperate with the organisers as the event was planned to be an exclusive one, mainly comprising Puneeth’s colleagues (including those from Tamil and Telugu industries). The entire event was telecast live on all prominent news channels.

Among the many dignitaries present was Chief Minister Basavaraj Bommai who spoke dearly about the late actor and also announced a posthumous ‘Karnataka Ratna’ award owing to Puneeth’s cultural prominence in the State and also his many noble philanthropic endeavours.

‘Karnataka Ratna’ is the State’s highest civilian honour and Puneeth Rajkumar becomes the second actor to feature in the elite list, along with his father Dr. Rajkumar who was awarded in 1992.

At the event, Puneeth’s family members, members of the film industry and senior politicians in front rows held candles while others switched on the flashlights of their mobile phones as a mark of respect.

When images of Puneeth as a child were shown on the screen, elder brothers, actors Shivarajkumar and Raghavendra Rajkumar, could not hold back their tears. Actors Yash, Darshan, Jaggesh, Ramesh Aravind, V. Ravichandran, Umashree, Sudharani and Rachita Ram were some of the stalwarts from Sandalwood at the event. Big names from other film industries R. Sarathkumar, Shrikanth and Vishal too were present.

Titular head of erstwhile Mysore royal family Yaduveer Wadiyar told reporters, “We are all here to convey our condolences to the entire film fraternity. It is indeed a sad day. Very shocking that he left us all. His contribution towards film and society is tremendous. Alongside that, the few times I met him, his personality was always so humble and well-meaning. It is our duty to be here as a Kannadiga and convey our condolences.”

Former CMs B.S. Yediyurappa and Siddharamaiah too spoke about their association with the ‘Power Star.’

Calling his brother his biggest inspiration, an emotional Shivarajkumar, sang a few lines of  ‘Main shayar to nahin’ from the movie ‘Bobby’ (1973). “We would always sing this song at all our parties,” he said, controlling his tears. “He achieved so much in cinema at a young age. His other side of being involved in social service is equally inspiring. I will never believe he has left me,” said Shivarajkumar.

A grieving Ashwini, Puneeth’s wife, hardly gathered courage to watch tribute videos of her husband and left the event along with daughter Vanditha after Bommai’s address.

Ace composer Gurukiran and lyricist Nagendra Prasad were main men behind soulful performances dedicated to the star. A heart-touching video of Puneeth’s inspiring journey came in the poignant voice of actor Sudeep.

Taking to her Instagram yesterday, Ashwini Revanath shared a letter addressed to the fans who sent their love and support to the family of the deceased actor during the time of grief. She also admitted being in ‘tears’ after seeing many follow the late actor’s footsteps and registered for eye donation. She wrote:

“The untimely death of Puneeth Rajkumar has been shocking not only to the family but also to the entire State of Karnataka. It is hard to imagine the extent of pain this loss would have brought on you, the fans who made him the ‘Power Star’. Despite the pain that you have gone through, you have not lost your calm and not let any unpleasant incidents occur, ensuring a respectful farewell to                      Puneeth Rajkumar.”

She continued, “It is with a heavy heart that I acknowledge the condolences from millions; not only cinephiles but people of all ages from India and abroad alike. I am in tears when I see thousands of you follow your dear Appu’s path and register for eye donation. He will live on in these good deeds that you do by keeping him as an ideal and also in the zeal that his memory inspires in you. On behalf of our entire family, heartfelt gratitude to all the fans and every individual for your love and support.”