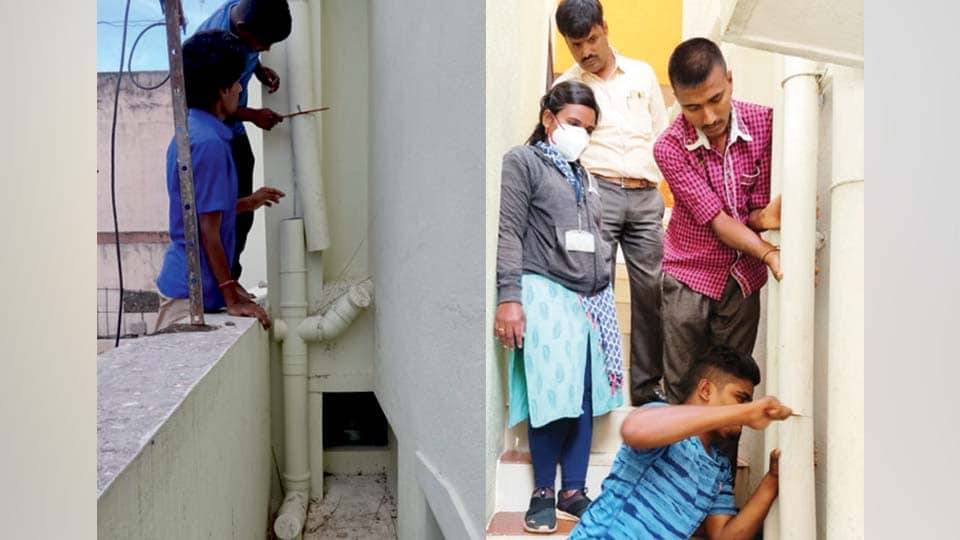 Rs. 2,000 fine to be imposed if residents do not cut off pipes themselves

Mysuru: With many house owners connecting pipes from terrace to Underground Drainage (UGD) pipes to let rain water flow into it, which is resulting in rainwater mixed sewage water overflowing from manholes as the UGD pipes cannot bear such pressure, the officials of Mysuru City Corporation (MCC) have begun an operation to disconnect such connections in city.

The officials of the UGD Division of MCC and Vani Vilas Water Works (VVWW), who have commenced the task of disconnecting rainwater pipes from terraces which are attached to UGD pipes in all nine Zones of the MCC, have warned the house owners who have connected rain water pipes to UGDs to disconnect such connections themselves and let rain water flow into open storm water drains, failing which the officials warned of imposing Rs. 2,000 fine on house owners.

In all 65 Wards of MCC in city, about 1.5 lakh houses have such connections and if the staff and officials of MCC go to such houses to disconnect rain water pipes attached to UGDs, the house owners do not allow the MCC to cut off such pipes, but also bring in recommendations from Corporators, MLAs, MP and other elected representatives against disconnecting the pipes which is posing a challenge to the MCC.

At present, the MCC is disconnecting such pipes from under-construction houses and from houses which are nearing completion. Only the illegal pipe connection to UGD is being disconnected as there is no                        one to object.

The drive to disconnect such illegal connections is led by the Zonal Officers of all nine Zones of the MCC, which will continue and MCC Superintending Engineer Mahesh has urged the residents to co-operate with the staff.