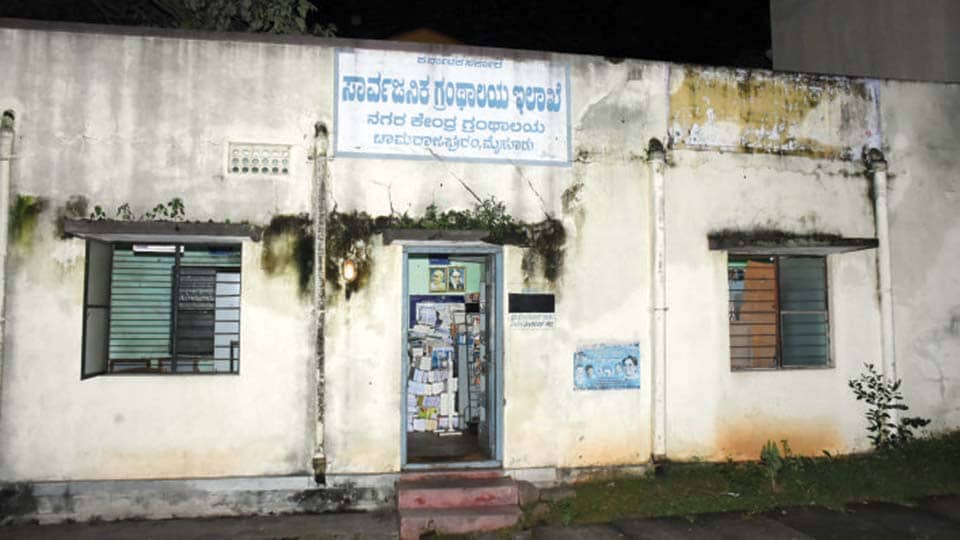 Many libraries are in dilapidated condition due to non periodical maintenance

Mysuru: With libraries not maintained periodically, most of these ‘Knowledge Temples’ across the city are leaking during rains and these buildings are becoming dilapidated and may collapse if steps are not taken to repair these library buildings soon.

Many libraries lack staff and funds for regular maintenance. Also, the negligence by officials and elected representatives are some of the causes for these library buildings to dilapidate.

There are 33 libraries in city out of which the maintenance of libraries on Vishwamanava Double Road in Kuvempunagar, at People’s Park in Nazarbad, near Govt. Ayurveda Hospital Circle and in Hebbal are undertaken by the Public Libraries Department. The rented library buildings at Jayalakshmipuram and Gandhinagar and the libraries in Mysuru Central Prisons, Karnataka State Reserve Police (KSRP), District Armed Reserve (DAR) and City Armed Reserve (CAR) premises come under Public Libraries Department.

The roof of library buildings at Subashnagar, Basaveshwara Road, Chamarajapuram, Gayathripuram 1st Stage and on Vishwamanava Double Road are dilapidated and rain water is leaking from the roofs which is destroying books and furniture.

Meanwhile, B.S. Vikas, a regular library goer, said that rain water was leaking from the roof of the Public Library at Chamarajapuram, which is destroying books. He also said that the leaking rain water was entering the electric switch box in the library resulting is electric shock to those who try to switch on the lights. “Though the matter was brought to the notice of the library staff, they casually say that they cannot do anything about it.”

A few library goers said that the MCC collects 6 percent cess for library maintenance when Property Tax is collected and the MCC should give about Rs. 5 to Rs. 6 lakh every year for the maintenance of libraries. They added that the Civic Body has not given the same and has kept the dues to the tune of Rs. 20 crore. How can the maintenance of libraries and its development be taken up when money collected for the purpose is not given and who will be responsible if the library buildings collapse? they questioned.

Meanwhile, Deputy Director of Public Libraries Department B. Manjunath said that the Department has urged the MCC Commissioner to release funds for repairs and maintenance of library buildings and even the Government has issued order to pay the dues.

“Many students coming to the libraries are facing a lot of problems and a few students have also complained about it. But how can the Department take up repair and maintenance works when funds are not released,” Manjunath said.

An officer of the Public Libraries Department, speaking to SOM, said that in all 33 libraries, only 17 permanent employees are working and 55 people are employed on contract basis. There is shortage of staff even if three people are employed in each library, he added.

The officer further said that due to shortage of staff, it is not possible to keep vigil on those coming to the library. Who will be responsible if books are stolen? he questioned.