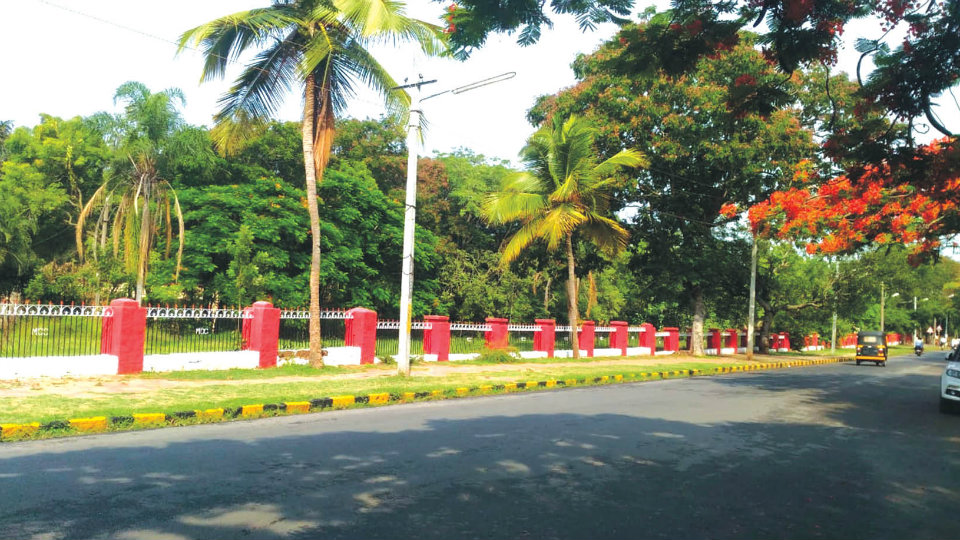 Mysuru: A team of Mysuru City Corporation (MCC) officials along with Chamaraja MLA L. Nagendra inspected the MCC Quarters Park near Cheluvamba Park in Yadavagiri this morning to discuss the development of the park as urban forest and set up a children’s amusement and a Science Park.

MCC owns 2 acres and 11 gunta land in MCCs Quarters adjacent to CFTRI campus near Cheluvamba Park. Earlier, MCC had planned to develop this park as a Rose Garden and a Science Park, but now the plan has been changed to urban forest as the city is lacking such an urban jungle.

The purpose of such a forest is to educate the people on varieties of trees and it is the brainchild of MLA Nagendra. The land will be divided between urban forest and Science Park, officials said. The MCC has already allocated Rs. 40 lakh to develop this park with funds released from 14th Finance Commission. Nagendra has also promised to get money from his MLA Local Area Development Fund.

He said that urban forest system needs to be an integral part of the city project so as to help regulate micro-climatic changes. Cities like Mysuru too should have such initiatives to regulate the escalating temperature, he said.

Such forests is also the need of the hour when the city suffers from bad air quality, he opined and green cover promotion will be the first step towards achieving good air quality, he added.

They told Star of Mysore that they will take up the initial stages of development of  urban forest by planting thousands of saplings at the park on June 5 or 6 marking the World Environment Day.

After inspecting the park, MLA Nagendra and MCC Officials proposed the construction of a mini auditorium inside Cheluvamba Park but residents of Yadavagiri, environmentalists and Mysuru Grahakara Parishat (MGP) opposed the plan as such activities will ruin the beauty of the park.

They opposed laying of interlocking tiles on the walking path. Bhamy V. Shenoy of MGP and others opposed the MCCs decision of taking up development activities inside the Park.