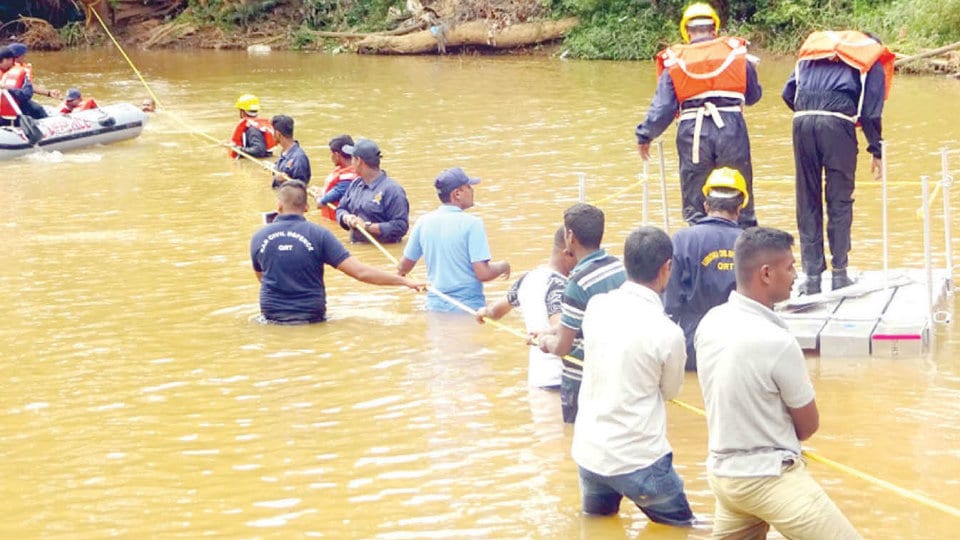 Madikeri: The Kodagu District Administration is geared up to face rain fury. As a preparation to tackle floods and landslides during monsoon, the District Administration, assisted by Paramilitary forces including the National Disaster Relief Force (NDRF), conducted a mock exercise at vulnerable sites on Wednesday.

The landslide scene was recreated for the mock drill and the affected people were evacuated. All roads leading to hilly ranges were closed. The rescue operation was carried out using a rope.

The scene of ambulance shifting the affected to the hospital was recreated. Boats, lifting bag, cutter, concrete cutter, life jacket, rope and other modern rescue operation equipment were exhibited.

As loudspeakers gave information on ‘victims’ stuck in many places, a team rushed to the spot to rescue them and ambulance rushed in with first-aid equipment. Volunteers playing ‘victims’ were buried under the soil and some lay down under tree branches as announcements of their whereabouts were made over the public address system.

The rescue teams equipped with ropes, stretchers and chainsaws rushed to the spot where the ‘victims’ were stuck and rescued them with a person explaining the process. At Hattihole, automatic boats and floats created from water bottles were used in the operation.

During the drill, the NDRF and the SDRF personnel displayed how to go about rescuing and evacuating stranded people from hilly terrain to the plains, administering first aid, etc.

Deputy Commissioner Annies Kanmani Joy said the administration has taken all precautionary measures in anticipation of the worst-case scenario to deal with rescue, evacuation and relief.

“We have already identified geologically sensitive areas prone to landslides and adequate workforce and material have been deployed for swift action. The drill not only helped infuse confidence among the public but helped the forces gain coordination,” the DC added.

Superintendent of Police Suman D. Pennekar said “The Police Department will extend its support to the district administration. In case of necessity, additional Police personnel will be deployed.