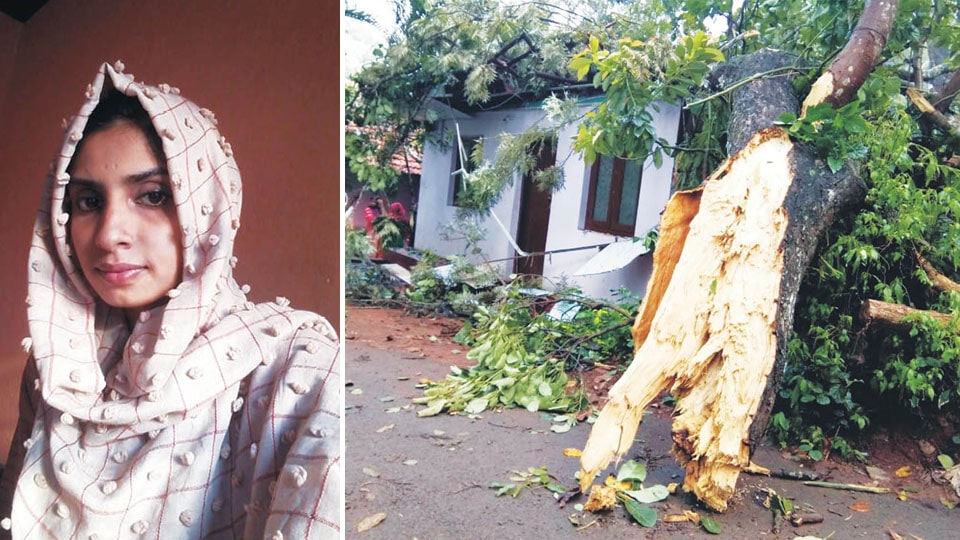 Mysuru: Rain fury has started in Kodagu even before the entry of Southwest Monsoon. One woman was killed last midnight when a giant tree came crashing on her house when she was sleeping.

The incident was reported from Tarikatte near Pollibetta in Virajpet Taluk which is witnessing heavy to very heavy rains accompanied by thunder and lightning since last week. Last night too it rained cats and dogs and 22-year-old Rehanath was killed instantly when a huge tree fell on their house at around 1 am.

Her husband Naushad sustained serious injuries and has been shifted to a hospital in Madikeri. The others sleeping inside the house, including the victim’s one-and-a-half-year-old son Najil had a providential escape. The tree was cut into half by blowing wind and Rehanath was severely injured on her head as the tree and the house roof crashed.

The tree was standing precariously and the area residents had petitioned the Devarapura Gram Panchayat to clear the tree as the house was in danger. However, the Gram Panchayat refused to cut the tree citing rules, alleged the residents. Today morning as the news of the death spread, irate villagers mobbed Panchayat Development Officer Mohan and Tahsildar Govindaraju and took them to task for not cutting the dangerous tree despite many appeals. They demanded immediate compensation to the family.

Funds to build own houses

Meanwhile, residents, whose houses have been destroyed in last year’s landslides in Kodagu and who are keen to reconstruct on the original site or a place of their choice, have been advised to ascertain if the place is safe for reconstruction.

READ ALSO  Shops open only on Monday and Friday in Kodagu

At a meeting held at DC Office in Madikeri yesterday, Kodagu Additional Deputy Commissioner P. Shivaraju said that those opting to build houses in their own sites should complete the construction within four months of the release of the first instalment of calamity relief funds. The government has announced the first instalment of calamity relief of Rs. 2 lakh per beneficiary.

Shivaraju met over 54 families who did not want to stay in group houses but wanted the government money to build their own houses at their own land. The government is chipping in with Rs. 9.85 lakh per house which is also the cost of each unit constructed by the government.

Construction as per specifications

He said the construction should be as per the specifications of the government and the beneficiaries should first ascertain if the site was suitable for construction. The balance amount would be released in a phase-wise manner based on the progress of work.

AC T. Javaregowda said that the houses should be built in an area not exceeding 5.75 square feet and the land should be registered in the name of the beneficiary. The Rs. 2 lakh that will be released must be used to lay the foundation for the house and the remaining money will be released when the houses are built up to the roof level, he added.

“No objection certificates (NOC) will be issued by the Gram Panchayats within a week and the Revenue Department will certify the list of beneficiaries. GPRS-based photographs at each phase of the construction should be submitted without delay,” Javaregowda said.

Taking exception to the four-month deadline, residents categorically stated that it would not be possible to complete the construction within the next four months. With the onset of monsoon just a week away, construction work was bound to be affected and as such, residents sought additional time for completing the construction.