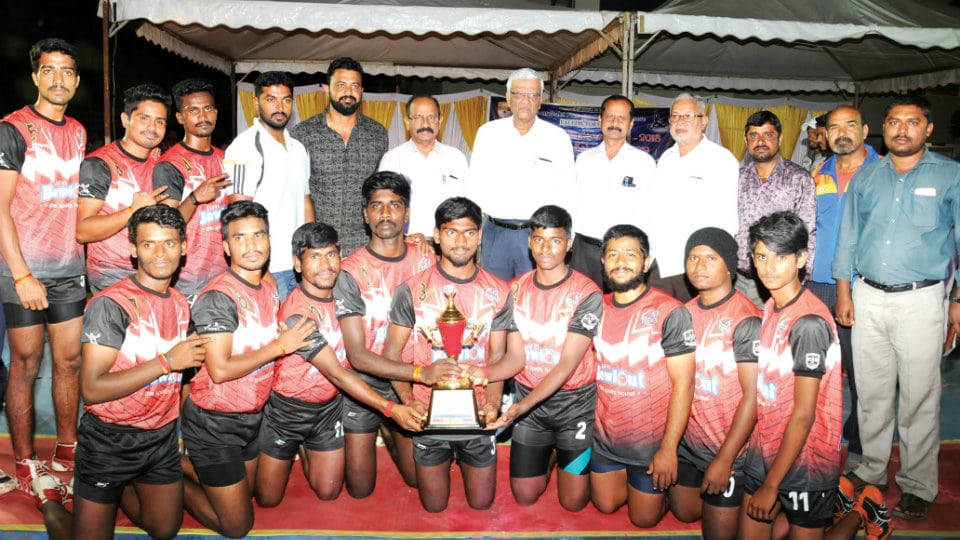 Chamundeshwari Bulls bagged winner’s trophy by defeating its nearest rival Anjani Panthers at the two-day Mysuru City level Men’s Pro Kabaddi League by Vidyavardhaka First Grade College as part of its celebrations at the College premises on Seshadri Iyer Road in which concluded on Sunday.

While SLD Bulls won third prize, Mysore Vultures secured fourth. The ‘Best Rider’ title was bagged by Gowtham, ‘Best Catcher’ was given to Krishnamurthy and ‘Best All-rounder’ was given to Hemanth Kumar.

A total of eight teams participated in the event and franchisees were the owners. Best players were selected from various colleges of the city through system after inviting applications.

It may be mentioned here that District Minister G.T. Devegowda had inaugurated the event on Jan.26 and the management of Vidyavardhaka Educational Institution had handed over a Demand Draft of Rs.10 lakh to the Minister and DC Abhiram G. Sankar to Chief Minister’s Kodagu Relief Fund, which was donated by the employees of the Institution form their one-day salary and also from Vidyavardhaka Sangha (VVS).