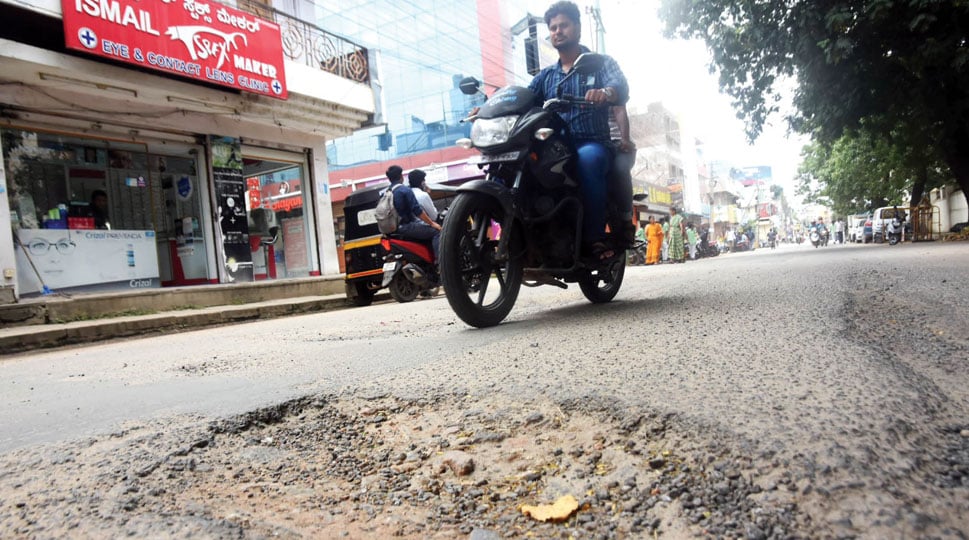 Mysore/Mysuru: The State Government has decided to celebrate Dasara 2022 in a grand manner as there was no opportunity to showcase pomp and glory in the last two years owing to COVID pandemic.

Though the High-Power Committee meeting held in Bengaluru,  chaired by the CM decided to release Rs. 10 crore through MUDA for Dasara, the meeting maintained a stoic silence on the funds for development works including a facelift for city roads that desperately need attention.

The low-key Dasara that was celebrated in 2020 and 2021 owing to the pandemic gave an excuse for the Mysuru City Corporation (MCC) not to take up civic works on a large scale. In fact, after 2019, no major road works were taken up and as a result, the roads are in a bad shape today, forcing the common man to curse the MCC and question its accountability.

While the State was quick to release Rs. 10 crore just days ahead of Prime Minister Narendra Modi’s June 21 visit to Mysuru to take part in the International Day of Yoga celebrations, it is now silent on the development of other roads, indicating that this year too, the MCC would carry out hotch-potch patchworks to fill the potholes.

The enthusiasm shown in re-asphalting the roads to make the PM’s ride on select roads (up to 18 kilometres) a smooth affair is clearly missing here to make the common man’s commute hassle-free. Usually, the cash-strapped MCC starts the patch-up works just a fortnight ahead of Dasara.

Patchworks this year too?

Patchworks and last-minute road and footpath works are a bane for this Heritage City and this routine is followed religiously by the official machinery and the political class every year and the way the works are carried out routinely invite public criticism.

These eleventh-hour works are naturally shoddy and the road or footpath is back to square one in just a few months, endangering public safety. And these are again taken up next year as part of patchwork, giving jobs, commissions, cuts and percentages to a long list of people who wait desperately for Dasara to make money. And the cycle goes on every year.

It may be recalled here that in December 2021, the MCC had called for tenders to repair roads in all the 65 Wards and all the works were to be completed by February-March 2022. The tenders were for road works including pothole-filling and laying of new roads in all the Wards and a sum of Rs. 7.5 crore was fixed. The tender was to be finalised on Jan. 6, 2022. However, there is no further news of the tender.

Reacting to the bad shape of the roads, In-Charge Mayor Sunanda Palanetra told SOM that last year, she had asked for a special grant from the CM for Dasara road works. “Due to COVID and other factors, the grant was denied. But later, the CM granted Rs. 50 crore for MCC and of this, Rs. 25 crore has already been received. Many roads have been cleared of potholes with this amount in Wards — as each Ward has been given Rs. 10 lakh — and the delay in completing the works is due to rain,” she explained.

The Mayor said that almost all roads in 65 Wards will be taken up once the rains stop as the tender process is already complete. “I once again appealed to the CM to release Rs. 10 crore for Dasara beautification, at least on the Jumboo Savari route,” she added.