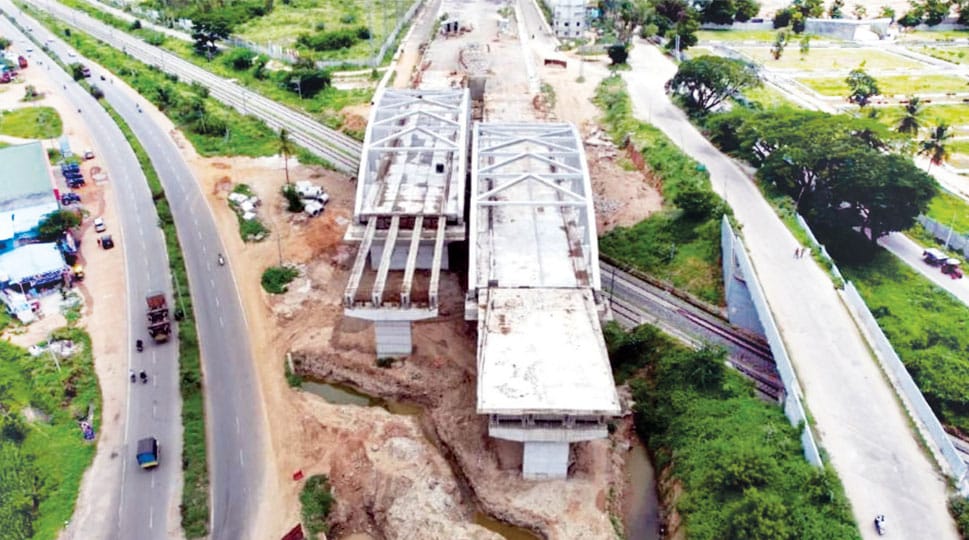 Mysore/Mysuru: Amidst reports that the 10-lane Mysuru-Bengaluru Economic Corridor (Expressway) will not be open anytime soon, Mysuru-Kodagu MP Pratap Simha has clarified that the main carriageway of the Expressway will be open to traffic by October this year.

During the Dasara High-Powered Committee meeting in Bengaluru on July 19, Chief Minister Basavaraj Bommai told reporters that the works had been delayed due to various factors including heavy rains and the project is not scheduled to open during Dasara as mentioned earlier.

On Wednesday, PWD Minister C.C. Patil too seconded the CM’s words by saying that the works on the mega project have been delayed and will not open during Dasara-2022.

Speaking to Star of Mysore yesterday, the MP said that the main carriageway of the Expressway would be open by October this year while there are other pending works on the entry and exit points that will take another six months.

“It is a Central Government project and there are some pending works in the entry and exit points of the Highway like in Mandya, Maddur, Channapatna and Ramanagara. These works will take time as several factors need to be considered keeping in mind the needs of the local travellers including those who take the service roads. But the main carriageway will be open by October,” he added.

Sources from the National Highways Authority of India (NHAI) which is implementing the project said that over 70 percent of the works had been completed. There are some pending works at a couple of flyovers and underpasses that will take time to finish, they added.

The total length of the Expressway is around 117 kms and it is being executed under two packages — the first one runs from Bengaluru to Nidaghatta in Maddur taluk and the second one from Nidaghatta to Mysuru.

The corridor has nine major bridges, 44 minor bridges and four rail overbridges. It comprises a six-lane access-controlled carriageway for traffic to move at a high speed and a two-lane service road on either side for the benefit of local traffic.

It may be recalled here that in March this year, Union Minister for Road Transport and Highways Nitin Gadkari had tweeted  saying, “The 10-lane Bengaluru-Mysuru Economic Corridor is being constructed at record speed. The Rs. 8,172-crore Economic Corridor is likely to be completed by October 2022. It will reduce the travel time between the two cities from the current 3 hours to only 90 minutes.”

3 COMMENTS ON THIS POST To “Status of 10-lane Mysuru-Bengaluru Highway: Main carriageway to open in October this year: MP”