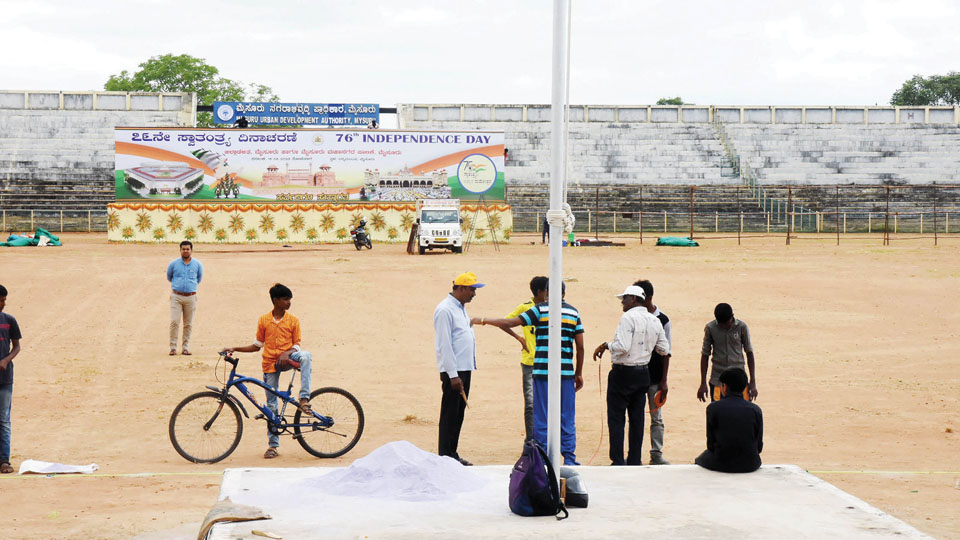 Apart from an impressive parade of more than 20 Police and other allied security units, thousands of children from various schools in the city will perform in various cultural events to celebrate.

After two years of the COVID-19 pandemic, this is the first time that Independence Day celebrations will see a huge crowd gathering at the event. The Parade Grounds can accommodate 15,000 people.

In fact, Azadi Ka Amrit Mahotsav will begin a day early in Mysuru with a host of cultural programmes in the backdrop of the illuminated Mysore Palace. The celebration, organised by the Mysore Palace Board, will begin at 7 pm and will go on till 12 midnight.

The stage programme at the Palace will begin at 7 pm and Chief Minister Basavaraj Bommai will virtually inaugurate the event at 7.15 pm. MLA S.A. Ramdas will preside and District Minister S.T. Somashekar will be present.

Between 8 pm and 9 pm, there will be a dance feature titled ‘Sainika’ (Soldier) by Vid. Sridhar Jain of ‘Aptamitra’ fame and troupe, from 9.15 pm to 11.15 pm it will be ‘Vande Mataram’ music programme by well-known playback singers Ajay Warrior, Ankita Kundu, Shashikala Sunil, Nagachandrika Bhat, Ravi Murur, Chintan Vikas and troupe.

A special laser show by Laser Vision has been arranged between 11.30 pm and 12 midnight. This apart, as part of Partition Horrors Remembrance Day, a photo exhibition is also underway at the venue today by the Department of Information and Public Relations, Mysuru and will go on till 12 midnight.

After the programmes at the Palace till midnight, the formal Independence Day will be celebrated by District Administration at Torchlight Parade Grounds, Bannimantap, tomorrow. District Minister S.T. Somashekar will hoist the National Flag at 9 am. MLA Tanveer Sait will preside.

Thousands of spectators are expected to throng the Parade Grounds after a gap of two years. All Schools and Colleges have been invited to the event and the Block Education Officers of North and East have been asked to send their children to Bannimantap after the I-Day programmes at their schools.

While spectators can be seated in the seating arrangements at the Parade Grounds, a VIP enclosure with pandals is being set up to accommodate 500 of them. The entire ground premises is being cleaned and earth movers are being used to clear the weeds and level the uneven land.

As part of the celebrations, various cultural programmes will also be held at Kalamandira at 5 pm. MLA L. Nagendra will preside. School and College students, State Government employees and various Associations and organisations will take part.