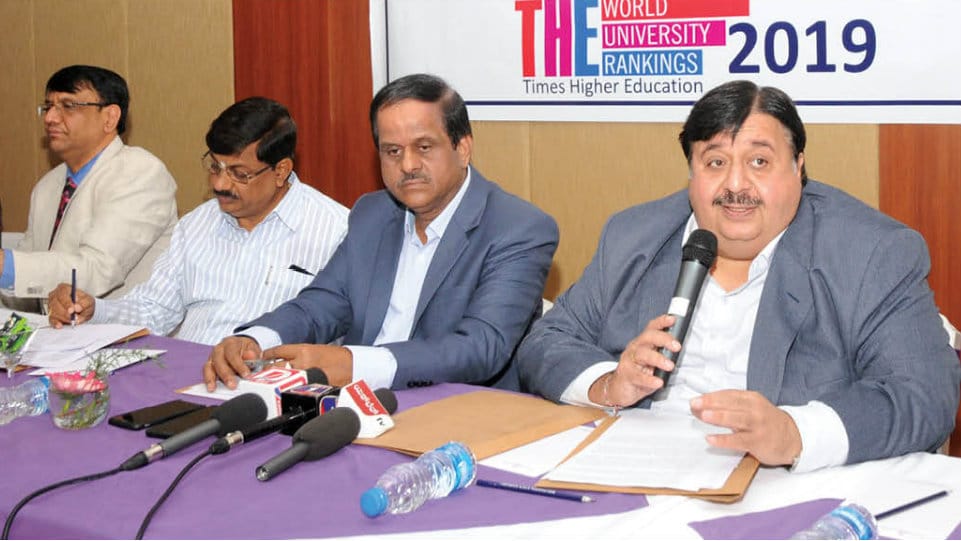 Mysuru:  As per the World University Rankings for 2019 announced by United Kingdom’s Times Higher Education (THE) recently, JSS Academy of Higher Education and Research is ranked between 401-500 (on par with 11Ts) out of 1,258 institutions worldwide.

The Academy is among the top five Universities in the country where 49 institutions from India participated.

Disclosing this at a press meet at a private hotel in city yesterday, Academy Vice-Chancellor Dr. B. Suresh said that the Academy, earlier known as JSS University, has progressed phenomenally over the last ten years. He further said that the National Institutional Ranking Framework (NIRF) has ranked the Academy 37th among 957 Universities in India. It is also the first institution in the State to receive the coveted QS 4-stars by QS Quacquarelli Symonds, UK in 2018.

JSS Academy of Higher Education and Research VC Dr. B. Suresh addressing a press meet at a private hotel in city yesterday as JSS Mahavidyapeetha Executive Secretary Dr. C.G. Betsurmath and others look on.

The Pharm D programme of the Academy has also been awarded the International Certification by Accreditation Council for Pharmacy Education (ACPE), USA and becomes the first among the Universities in the Asia Pacific region. About 5,500 students are pursuing various programmes of the Academy which has spread its wings to Ooty also. To extend the horizon in the field of Health Sciences, Departments of Water and Health, Health System Management Studies and Life Sciences were newly opened, explained Dr. Suresh.