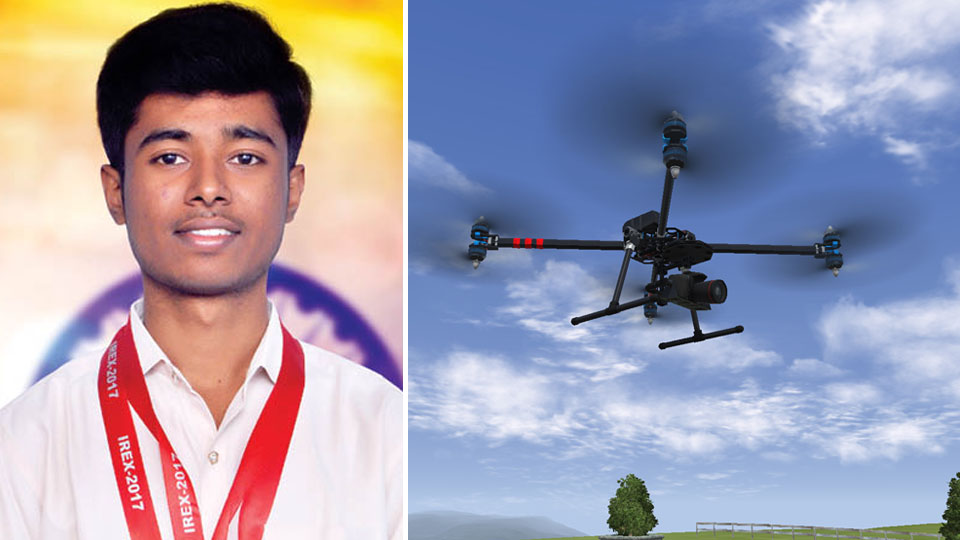 Mysuru: “We are very proud that one of our students N.M. Pratap has reached the national and international level as a young scientist working on Drones,” said Prof. B.V. Sambashivaiah, CEO, JSS College of Arts, Commerce and Science.

He was addressing a press conference at Patrakartara Bhavan here regarding the achievements of young scientist Pratap, a student of third year B.Sc (CBZ) of the college. He said that Pratap had worked on border security telegraph, cryptograph in drone networking system, drone in traffic management and National Socio Defense areas.

Realising that just one drone cannot support all the systems, Pratap is studying to find out the use of multiple drones. For instance use of sensor network for healthcare and human rescue missions have resulted in an improved performance and reliability along with achieving high speed energy efficiency. This is called modular wireless sensor network on which he is working, said Prof. Sambashivaiah.

Pratap had participated in the International Robot Exhibition in Tokyo, Japan recently and bagged gold and silver medals and cash prize of US $ 10,000. For his achievements, he has won a position as Project Developer under Skill India by Ministry of Science and Technology, with a research Grant, he said.

In service of the nation

Already the drone network is used in many areas including border security and traffic management apart from human rescue missions. The use of drones is going to play a major role in defense of the country. I have been influenced by the flying of the helicopter and it triggered an interest in me to work on drones. I come from an agriculture family. My parents and staff of JSS College have supported me a lot. I want to devote my energies in the service of the nation.”