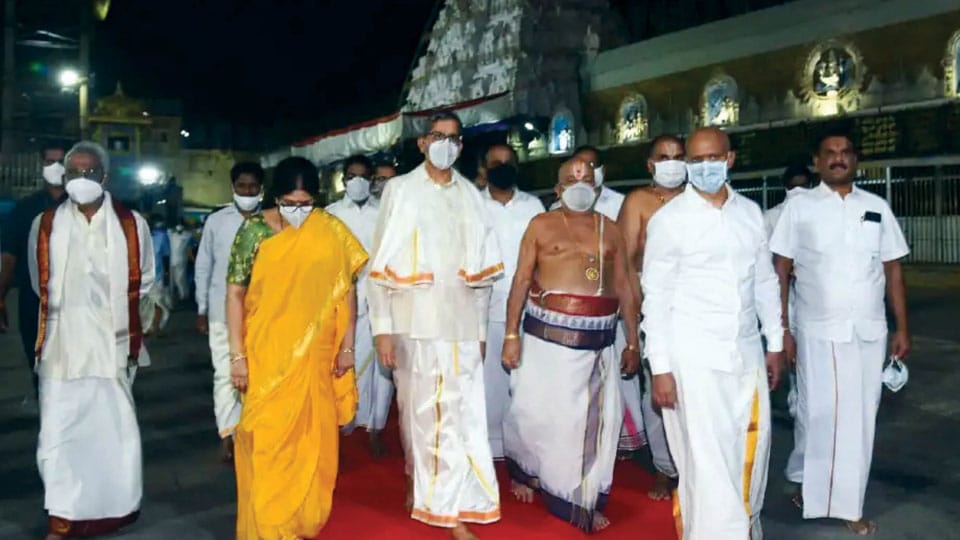 Tirumala: Chief Justice of India (CJI) Justice N.V. Ramana, who arrived here along with his family members on a two-day pilgrimage visit on Thursday evening, offered prayers at the ancient hill shrine of Lord Venkateswara in the early hours of today.

After night halt at hilltop, Justice Ramana along with his family worshipped the presiding deity during the Abhishekam Seva period.

Earlier, on his arrival at the main entrance of the temple, Justice Ramana, an ardent devotee of Lord Venkateswara, was accorded a traditional welcome by TTD Chairman Y.V. Subba Reddy along with Executive Officer Dr. K.S. Jawahar Reddy and Additional Executive Officer A.V. Dharma Reddy.

After spending a few minutes praying before the presiding deity, Justice Ramana reached Ranganakula Mandapam inside the temple complex, where he was rendered Vedasirvachanam by the Veda pundits.

The TTD Chairman and the EO offered the temple’s prasadams and a photo memento of Lord Venkateswara to the CJI.

His visit to the shrine was the first time in the capacity of the Chief Justice of India.

After arriving in the temple town on Thursday, Justice Ramana along with his family members also took part in the Ekantha Seva ritual at the hill temple.

Police have made elaborate security arrangements at Tirumala Hills in view of Justice Ramana’s visit.