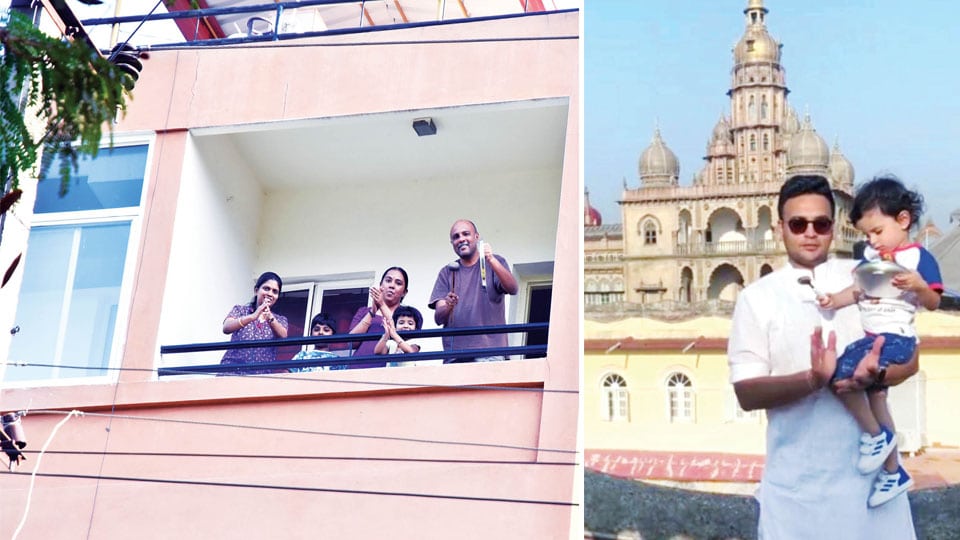 Mysore/Mysuru: Mysureans came out onto their balconies and stood near open windows to clap, clang metal vessels and ring bells yesterday to cheer emergency workers battling the spread of the Coronavirus during a nationwide lockdown.

Prime Minister Narendra Modi had asked citizens to stay indoors for a voluntary dawn-to-dusk curfew, but said they should make noise at 5 pm to show their appreciation for medics, nurses and sanitation workers.

People responded by blowing conch shells, singing patriotic songs and banging drums. Outside, the usually bustling streets were quiet. Many had planned early by sharing recordings of drum beats, conch, bells and trumpets to be played on speakers. Some had carried out noisy rehearsals on Saturday evening.

From children to the elderly, common people to VIPs, all came out in balconies, lawns and terrace of their homes as the clock struck five.

Many of Modi’s supporters praised the celebrations. Some even went as far as saying the positive energy would help push back the virus — though the Government quickly put out messages on Twitter saying the display of gratitude would have no impact on the virus’ spread.

Prime Minister Modi too thanked the people for the gesture. Taking to Twitter, he said it is an expression of gratitude by the people and also the sound of the bugle declaring the first success in the long battle ahead. “With this resolve and patience, let’s restrict (social distancing) ourselves as part of this long battle,” Modi tweeted in Hindi.