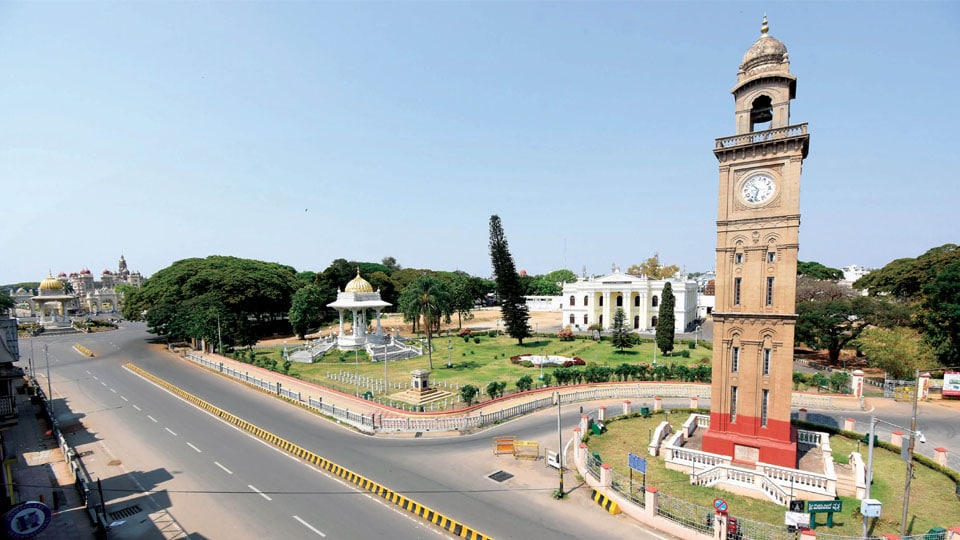 Mysore/Mysuru: Social distancing is the only way to flatten the curve of the Coronavirus spread. And like never before, Mysuru was completely deserted with residents remaining indoors yesterday the whole day as part of the Janata Curfew call given by Prime Minister Narendra Modi.

While roads were empty, commercial establishments, both small and big, remained closed throughout the day. An eerie silence prevailed across the city unlike the bandhs sponsored by political parties and even the streets and public places in the residential areas were bereft of people.

All markets were found shut and streets wore a deserted look. “We have decided to support Janata Curfew as it for the benefit of everyone,” said a resident of Vijayanagar First Stage. “It is a moral duty of every person to look after his own well-being as well as of those around him. Janata Curfew was imposed for the welfare of masses. There was no question of disobeying it,” he added.

Main streets as well as prominent roads were deserted as part of the initiative aimed at preventing the spread of COVID-19 by maintaining social distancing. The usually busy Central Business District in city remained empty. Both public and private transport operators had cancelled their services on Sunday responding to the call.

The City Bus Stand, Sub-urban Bus Stand, and Railway Station which are a beehive of activity, were completely deserted while all commercial establishments across the city and in the main commercial hub comprising D. Devaraja Urs Road, JLB Road, Dhanvanthri Road, Ashoka Road and Santhepete too remained shut.

The wholesale market at the APMC Yard and the retail selling at Devaraja Market were shut and a few daily wagers were seen snatching some sleep at the bus stand or in the open lawns. All commercial establishments and even some of the essential services such as petrol stations remained closed in both urban and rural areas. The highlight of the Janata Curfew was that people in residential areas too chose to stay indoors.

The KSRTC had withdrawn its services and even private transportation, including taxis and autorickshaws, remained off the roads. A few passengers in transit were stranded and preferred to spend their time in the bus shelters opposite K.R. Hospital. Even the hospitals were bereft of crowd as the Out Patient Department (OPD) was closed for the day, while hotels and restaurants remained shut.

Most organisations, including the Mysore Industries Association, had expressed support to the lockdown and hence there was no industrial activity with workers asked to take a holiday. Only pharmaceutical shops were exempted from the lockdown.