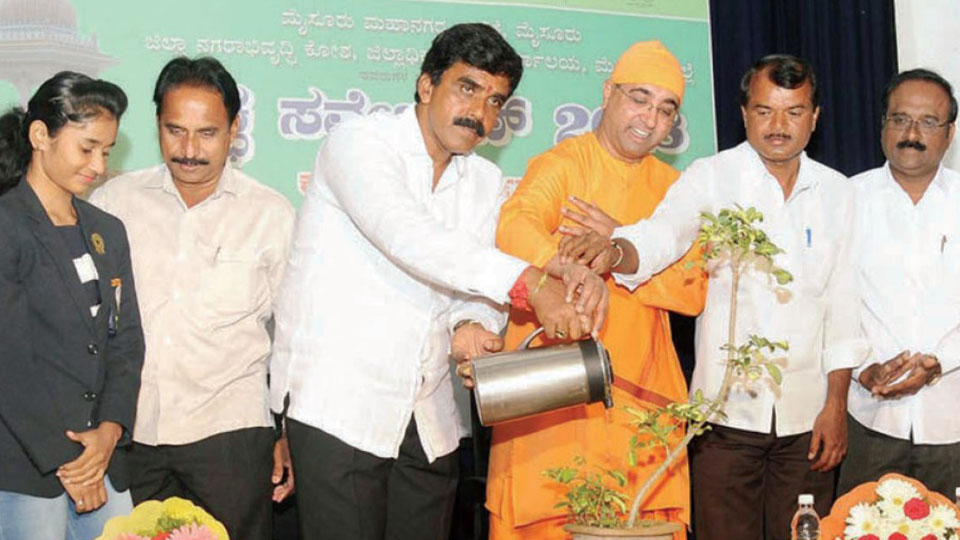 Mysuru: The Survey process to adjudge the ‘Cleanest city in the country,’ undertaken every year by the Union Government, will begin in 60 days. Mysuru city, which got the coveted position twice, is all set to grab the position again and Mysuru City Corporation (MCC) has already begun preparations in that context.

MCC has sought the co-operation of the public and organisations to accomplish the mission and has made cricketer Javagal Srinath, Yaduveer Krishnadatta Chamaraja Wadiyar and Yoga exponent H. Kushi as ambassadors for cleanliness campaign with equal support by Swami Atmajnanandaji of Sri Ramakrishna Asharama. As prelude to the Cleanliness Survey, a workshop was organised jointly by MCC, District Administration and Urban Development Cell at Rani Bahadur auditorium in Manasagangothri here yesterday which was inaugurated by Mayor M.J. Ravikumar.

Speaking on the occasion, MCC Commissioner G. Jagadeesha pointed out that the basic infrastructure provided by the Civic Body to the residents also played a major part in adjudging the Cleanest City.

He observed that MCC was not able to focus in that direction for the last two or three years.

Referring to Solid Waste Management, Jagadeesha said that the city was generating about 400 tonnes of waste daily and only 200 tonnes could be processed to manure and the rest was left behind. He regretted that one more waste processing unit was yet to take shape.

Hence, he opined that a stiff competition should be faced now to get the tag of ‘Cleanest City.’

Speaking on plus points of city, he said that 98% of city had the Under Ground Drainage (UGD) system with ample public toilets, thus establishing a open-defecation-free city.

Addressing the gathering, former MLC and Ward Parliament Chairman D. Madegowda sought the cooperation of the public to get the ‘Cleanest City’ tag for city. He suggested formation of a Resident Welfare Association for every 500 houses and an Eco Club in every School for a Movement on cleanliness awareness.

When the Cleanliness Surveillance Project was launched, 470 cities and towns were in the fray which shot up to 1,100 and now has it 4,041 triggering a tough competition. Hence, the participation and co-operation of the public is vital to get the Numero Uno position again.

In that context, a Swachh App was launched and about 20,000 people had downloaded the App. Ironically, the usage of the App by public was negligible. About 35 percent marks (1,300 points) would be awarded to public participation while adjudging the Cleanest City and hence, the MCC Commissioner has appealed citizens to actively participate in the campaign.