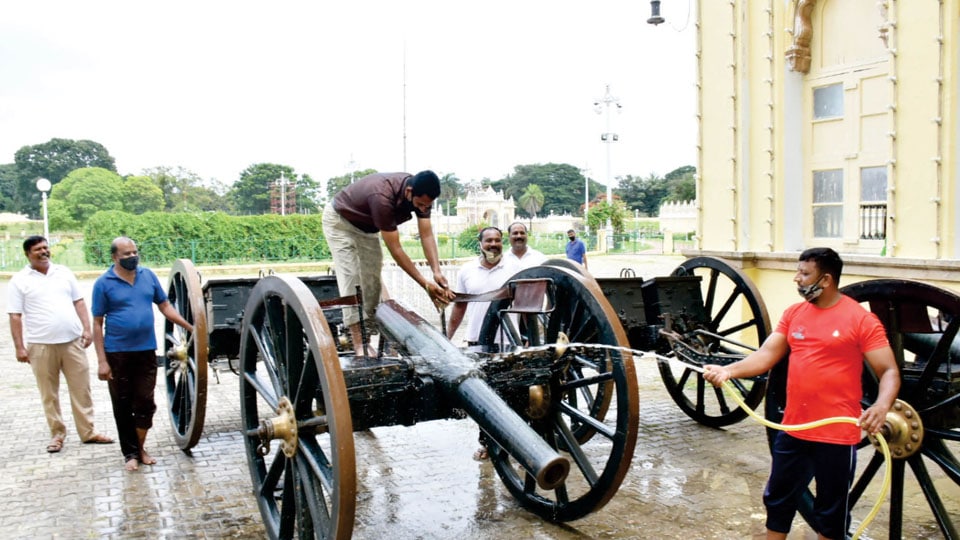 Mysore/Mysuru: A team of 30 City Armed Reserve (CAR) personnel of the Cannon Unit today began cleaning of seven Palace cannons for Dasara, which is just 17 days away. A 21-round cannon salute will be offered before the commencement of Jumboo Savari on Vijayadashami Day (Oct. 26).

Four cannons were cleaned today and the remaining three would be cleaned tomorrow.

The Forest Department has sought the date to bring the five Dasara elephants to accustom them to cannon firing sound and also to get used to the crowd.

Puja to the cannons will be performed on Friday and also dry firing of cannons would be held on that day.

On the day of Vijayadashami, cannons are fired for 21 times outside the Palace Fort to signal the beginning of procession, which marks the Dasara grand finale. To prevent the jumbos from getting nervous, the rehearsal of cannon gunfire is conducted three to four times in the run-up to the Dasara finale every year.