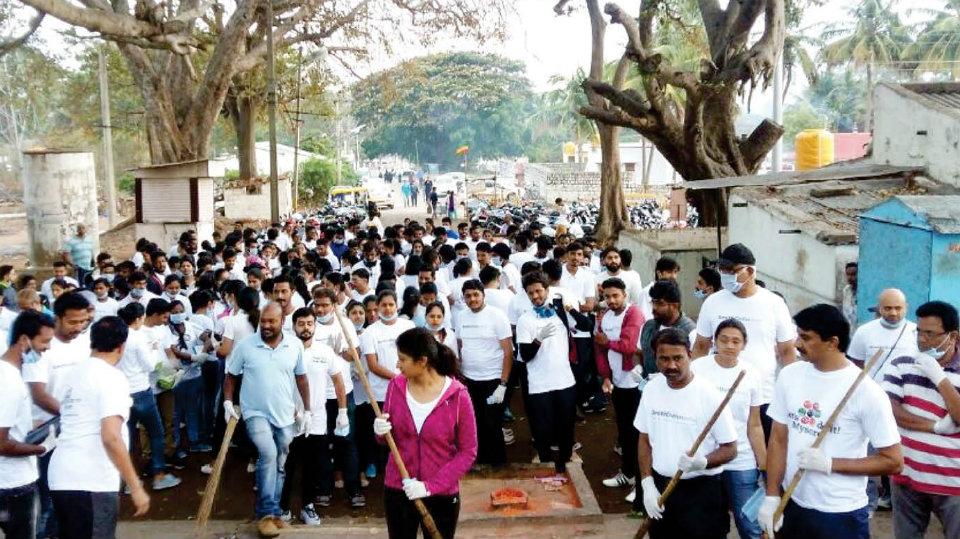 Mysuru: Nearly 500 volunteers picked and carted truckloads of garbage including beer and other liquor bottles this morning at the Chamundi Hill footsteps.

JSS Centre for Management Studies has organised ‘Mann Vex-18’ and had taken up the Chamundi Hill footsteps cleanup drive in association with ‘Let’s do it! Mysore,’ as part of Swachh Bharat Abhiyan.

The volunteers, mostly students from the college and others started the cleaning operations of the steps and surrounding areas with broomsticks and wearing masks. Thus, the claim of the Forest Department and the District Administration that Chamundi Hill is a plastic-free zone was debunked as they picked up hundreds of plastic water bottles and plastic covers strewn all over the place.

The volunteers were split into five or six teams with each of them covering 100 steps and started picking up the garbage thrown around from 6.30 am.

JSS Centre for Management Studies’ Prof. Sridevi Kulenur said that they have been holding this cleaning drive regularly and last year under ‘Go Green’ theme, hundreds of saplings and seeds had been planted.

Let’s do it! Mysore President B.S. Prashanth speaking to Star of Mysore said, “It is very sad to see so many beer and liquor bottles thrown in a sacred place like the Chamundi Hill. In fact, we have been conducting this cleaning drive in association with various colleges and other voluntary organisations since a long time and every time we find the liquor and plastic bottles.” 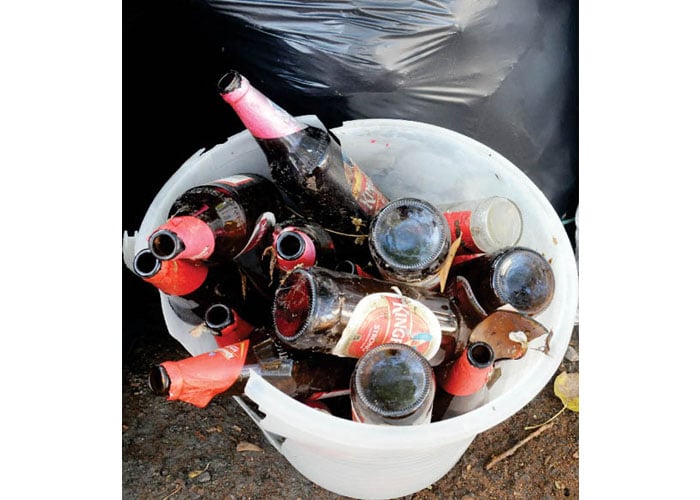 He said that they had taken the permission of the Forest Department for the cleaning drive as otherwise they would be held responsible if anything like a forest fire happened. “However, what we find is that the whole of Chamundi Hill is filled with garbage. One of the areas where plates and leftovers are found is the Viewpoint. The Department should put a stop to this defacing of the hill,” he said.

Wondering what the Chamundi Hill Gram Panchayat members were doing though they were in-charge of the maintenance, he said that when people come for picnics, they should be charged Rs.100 to Rs.150 as cleaning charges.

There is night ban of movement of vehicles from 10 pm every day and it is being strictly enforced by the Forest Department. Similarly, security guards should be stationed at the foot of Chamundi Hill to stop the unruly elements from disfiguring the hill, said Prashanth

Later, a truckload of garbage with about 30 to 35 sacks collected in black plastic bags were taken to the Excel Plant, a garbage disposable unit at Vidyaranyapuram.