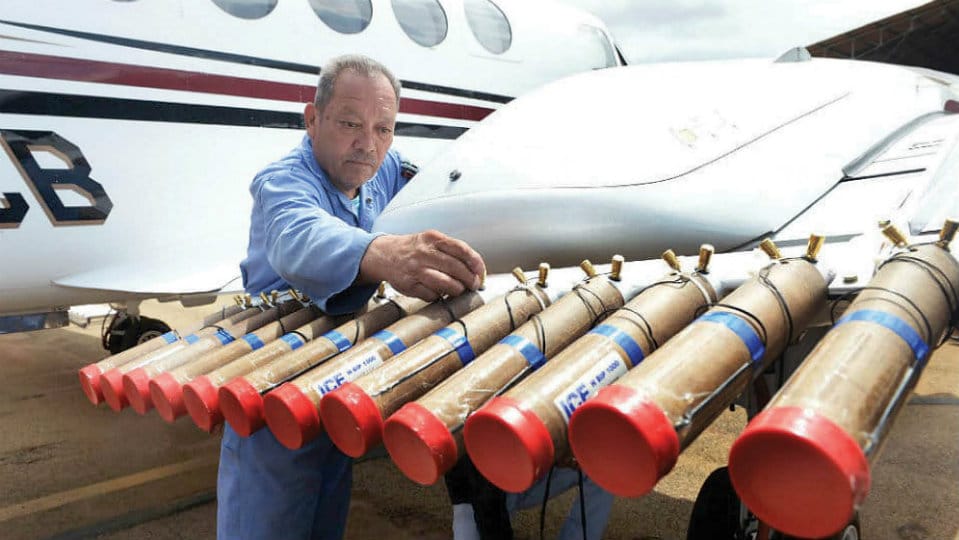 Cloud-seeding from Mysuru this evening

Mysuru: As the monsoon continues to play truant, drought-stricken Karnataka has begun cloud- seeding to enhance precipitation. The cloud-seeding operation was launched from the HAL Airport in Bengaluru yesterday by Karnataka Rural Development and Panchayat Raj Department and the operations will begin from Mysuru this evening.

Cloud-seeding involves spreading of aerosol (silver iodide or sodium chloride) into clouds to stimulate the precipitation process and formation of rains. It has been used in a variety of drought-prone countries, including the United States, China, India and Russia.

Kyathi Climate Modification Consultants and US-based Weather Modification Incorporated are undertaking the project at a cost of Rs. 45 crore. Mandatory clearances have been obtained from the Directorate General of Civil Aviation.

Speaking to Star of Mysore this morning, H.S. Prakash Kumar, Chief Engineer, Rural Water Supply and Sanitation Department, said that two aircraft will take part in cloud-seeding operations based on the availability of clouds. One aircraft will land in Mysore Airport at Mandakalli this afternoon and begin cloud-seeding at 6 pm.

“We are coordinating with Meteorological Department and Karnataka State Natural Disaster Monitoring Centre to identify clouds in the Mysuru region. Mysuru will be the central point and clouds will be seeded in Mysuru, Mandya, Kodagu and Hassan districts,” he said.

Radars to identify rain-bearing clouds are being set up and the target areas for cloud-seeding will be identified based on factors such as rainfall deficit and moisture deficiency, cloud formation and data generated by the radars, he explained and added that the conditions are now favourable for cloud-seeding.

“The types of clouds are also important to the success of cloud-seeding. There are significant differences between continental clouds and clouds formed over sea. We are closely coordinating with the Met Department to identify and seed clouds to induce rainfall,” he said.

L.K. Atheeq, Principal Secretary, Rural Development and Panchayat Raj Department, took to Twitter to explain about the operations. Sharing a map of Moisture Adequacy Index of districts in the State, he tweeted, “The priority for cloud-seeding is determined by looking at soil moisture images taken from the satellite. The yellows and oranges in this map are the moisture stress areas and we will send our aircraft in those regions. It also depends on cloud cover.”

During the trial sortie yesterday, which lasted 34 minutes, four sodium chloride and potassium chloride flares were burnt. “The aircraft is fitted with flares to fire Sodium Chloride & Potassium Chloride into the clouds. This is called Hygroscopic cloud-seeding. This is done from below the clouds,” he tweeted.