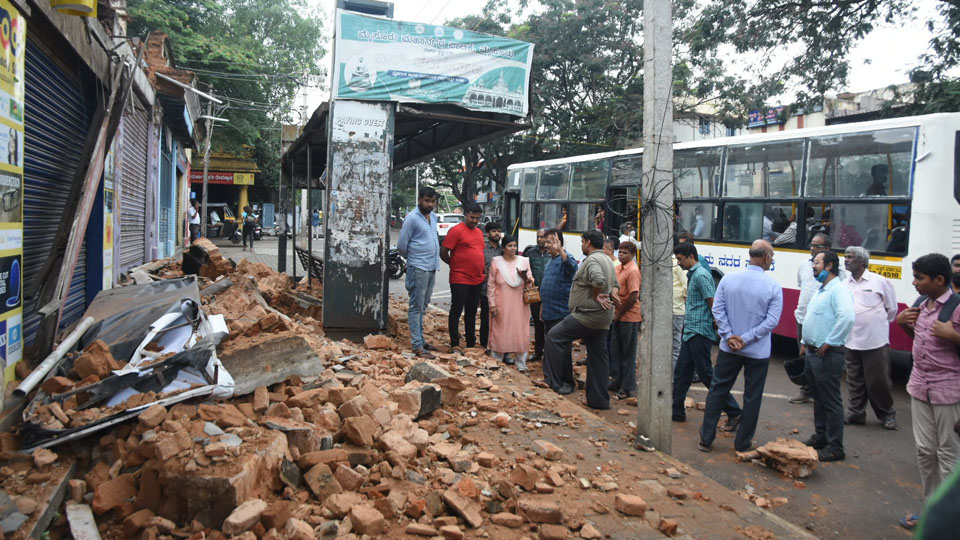 Mysore/Mysuru: Cloudy weather and drizzle continued this morning in city causing inconvenience to office-goers and others. As a result of continuous rains in the evenings almost for the past one week, a portion of the parapet wall of Vani Vilas Market near Agrahara Circle, behind the bus stop on Vani Vilas Road, collapsed this noon. Luckily, no casualties are reported.

Those who were waiting for the bus ran away soon after bricks started falling down. MCC staff, who arrived at the spot, were seen clearing the debris.

Vani Vilas Market, built in 1927, has about 100 shops and is a single storey building listed in heritage structures of city. MCC is its custodian. Following the structure getting weak, one of the gates was closed a few years ago.

Yesterday, the weather remained overcast for the whole day and light drizzle began in the evening, which continued the whole night bringing down trees and branches in many localities including T.K. Layout. Roads turned into small streams causing inconvenience to motorists.

A tree fell across Paduvana Road hindering movement of vehicles. MCC’s Abhaya-3 team, which reached the spot, cleared the fallen tree and made way for smooth flow of traffic.