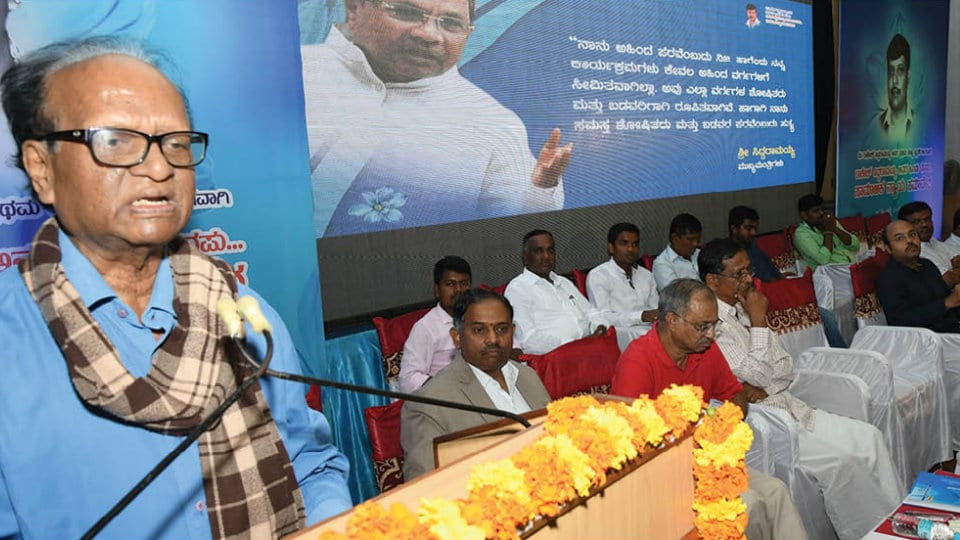 Mysuru: Chief Minister Siddharamaiah has become adept at choosing topics that evoke the conscience of the people in the country, leading to healthy debates on the subjects, said Litterateur and thinker Prof. Chandrashekara Patil (Champa).

He was speaking after inaugurating a day-long conference on ‘Rakesh Siddharamaiah – A Tribute and Social Justice Convention,’ organised by Karnataka State Backward Classes Jagriti Vedike and Rakesh Siddharamaiah Samajika Nyaya Samsthe, at Kalamandira, here this morning and said, “A year ago, Siddharamaiah lost is son who was in the prime of his life. It was a great personal loss but he bore it with a great degree of poise.”

Prof Champa said that he had known Siddharamaih for a long time. The first agitation that he (Patil) had been a witness to was in 1970 when Kuvempu had raised the banner of revolt against casteism. Later, he had participated in numerous agitations in the interest of the State.

Siddharamaiah was the first Chairman of the Kannada Watchdog Committee and he knows the importance of the language. The Kannada Development Authority Chairman S. G.  Siddaramaiah is trying to see that Kannada is implemented properly in the State and lot of discussions are taking place, he said.

The CM has written a letter to the Centre with regard to imposition of Hindi and why the State had stuck to only two languages — Kannada and English in Metro train stations in Bengaluru. The issue of the State flag has also become a hot topic of discussion in the country in many private TV channels.  Ma. Ramamurthy designed the State flag in the 1960s that won the recognition of the people, he said.

The BJP during B.S. Yeddyurappa had also raised this issue but the Centre had objected to it. Now, the subject has once again come to the fore. There is nothing in the Constitution to say that we cannot have our own State flag, said Prof. Champa.

He also dwelt on the controversy of the Veerashaiva-Lingayat demanding a separate religion and said that he personally did not want it, even though he himself was a Lingayat.

Prof. Chandrashekar Patil
All Govt. Degree Colleges to commence classes at 9 am from Aug. 1
An Emperor says Sayonara