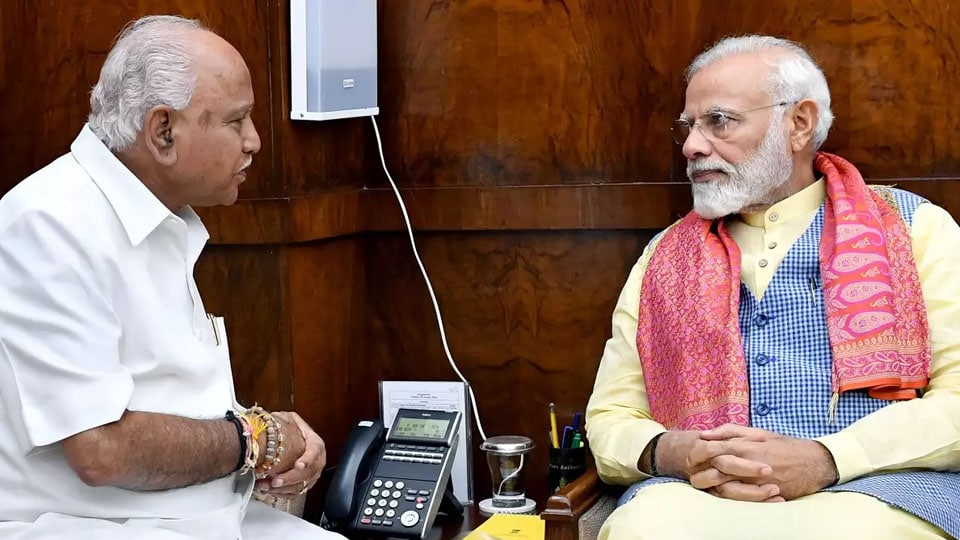 Seeks nod for Cabinet rejig; no change in leadership

According to sources, the duo spoke for about 15-20 minutes. The CM is learnt to have appealed to Modi to release additional funds to take up flood relief works and also GST dues.

During discussion, Yediyurappa reportedly sought permission to do Cabinet reshuffle or expand in the wake of growing demand from the BJP legislators for the Cabinet berth.

Later in the day, the CM is likely to meet BJP National President J.P. Nadda and Union Home Minister Amit Shah to take their advice on the Cabinet rejig. Yediyurappa told reporters that he had come to Delhi to take permission from the BJP High Command for the Cabinet expansion. However, the expansion or reshuffle will happen only after the 10-day monsoon session of the State Legislature which begins from Monday.

Meanwhile, rumour mill is making rounds on change in leadership in Karnataka. If sources are to be believed, the High Command is planning to find out an alternative to the incumbent Yediyurappa who has crossed 75 years of age.

According to BJP norms, no important position has to be given to leaders above 75 years of age. Going by this norm, the present CM Yediyurappa has to make way for another leader, which the party sources rule out in the current situation, going by the massive backup for him across the State.

It is alleged that there is severe discontent among legislators and are reportedly meeting in groups to push their agenda of replacing Yediyurappa who holds the record of becoming the CM for four times, albeit for short duration twice. But Party National leaders are not ready to take the risk of removing Yediyurappa at this juncture and invite the wrath of powerful Lingayat community. However, there is no confirmation of change in leadership from any leader.

The Ministerial aspirants, A.H. Vishwanath, M.P. Renukacharya, Arvind Limbavali, Murgesh Nirani and others are camping in Delhi since yesterday to lobby for the Cabinet berth.

MLC Vishwanath said he was definitely an aspirant for the Minister post but it was the discretion of the CM. “I have met our national leaders and stake claim for the Cabinet berth based on my experience. I will leave it to High Command and our leaders to take a call.”

Meanwhile, Renukacharya, a close confidant of the CM, ruled out change in leadership and blamed the media for creating confusion. “Yediyurappa was projected as the CM candidate much before the 2018 Assembly election and he became the CM last year. Why the High Command will change him when he was giving good governance,” he asked.

Chamaraja MLA L. Nagendra exuded confidence that either MLA S.A. Ramdas or MLC Vishwanath will make it to the Cabinet. The Cabinet reshuffle or expansion will take place during the first week of next month.