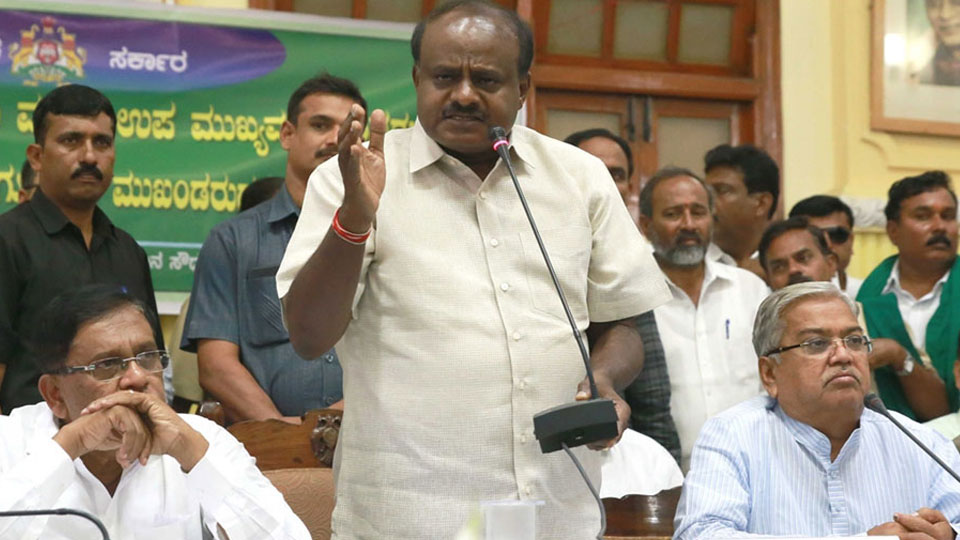 While Kumaraswamy did not announce the waiver of loans of farmers, he revealed that loans of all farmers would be waived and the scheme implemented in two phases in the next fifteen days.

“I am committed to waiving off farm loans,” he said without specifying when the scheme will be implemented. However, the CM said that all the modalities of the scheme would be ready within the next 15 days.

Kumaraswamy spoke after speaking to individual farmers at the meeting. They requested a complete waiver of loans, including those taken for occasions like weddings or for buying two wheelers and gold. He assured farmers that individual ‘debt-free certificate’ will be sent to the houses of farmers whose loans have been cleared. Plans were afoot to waive off farm loans between Apr. 1, 2009 and Dec. 31, 2017.

Kumaraswamy and his deputy made it clear that they would have to examine all claims before taking a decision. Far from his promise to waive Rs. 53,000 crore worth of farm loans within 24 hours of him assuming power as the CM, Kumaraswamy has advanced the delivery of his election manifesto assurances on account of having to consult with his coalition partners the Congress.

“In the next 15 days, Dr. G. Parameshwara and I will meet Rahul Gandhi and also discuss this,” he said while adding that he would have to convince the Congress President on the subject as well.

“My door is always open for you. This is a government for the farmers. But do understand it is not easy to waive farm loans in current scenario. I appeal to you to give me breathing time,” he said when murmurs of objections threatened to derail the meeting.

He insisted that there was ‘no going back’ on the promise. “Whatever may be the difficulty, our government is committed to maintaining fiscal discipline, and also saving you (farmers),” Kumaraswamy told the farmers.

“I’m getting it (the loan amount) calculated, whatever thousand crore rupees it is. Saving you is our government’s responsibility,” he told the gathering.  Kumaraswamy also said that he would call a meeting of representatives of nationalised banks in 2-3 days and seek information about farm loans extended by them.

“We will first focus on commercial banks located in non-city corporations. The focus is on regional, rural banks. We will also appoint nodal officers in every district. The nodal officers will receive applications for loan waiver from farmers and cross check them to ensure that money is not misused but is given only to farmers,” he said.

Farmer leaders unanimously advocated for a waiver of all farm loans irrespective of the loan and size of land ownership. Kuruburu Shanthakumar, President of  Karnataka Sugarcane Growers Association, said “If a Steel Bridge Flyover is to be constructed, the government is ready to sanction Rs. 15,000 crore but they don’t think about waiving farm loans.”