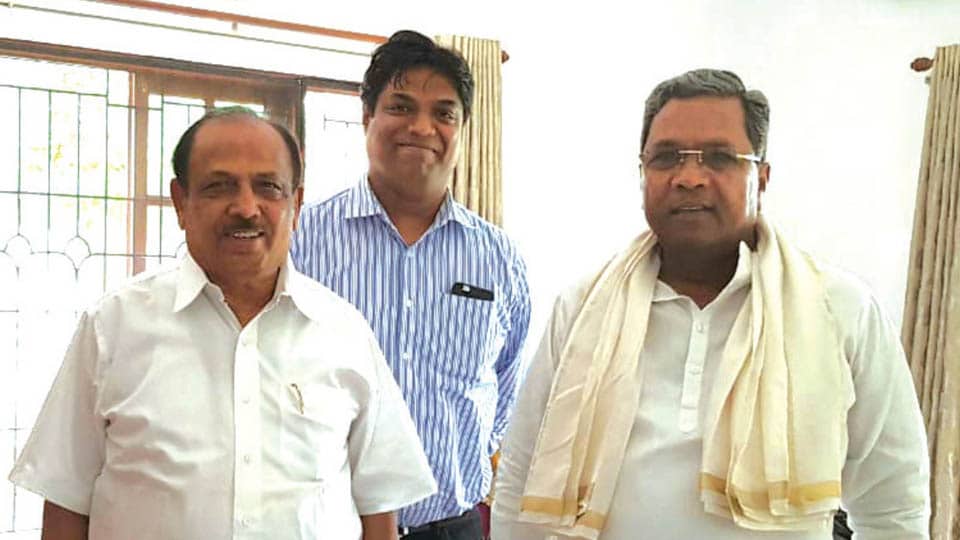 Revanasiddaiah is reportedly upset with the CM for neglecting him and his community though he (Revanasiddaiah) had helped the CM in a series of electoral victories in Varuna.

It may be recalled here that last week, probable BJP candidate for Varuna B.Y. Vijayendra met Revanasiddaiah at his house on the outskirts of Mysuru and sought his support for the elections. Soon after his visit, Siddharamaiah’s son Dr. Yathindra, who is likely to contest from Varuna, trooped in to meet Revanasiddaiah and seek his support.

Now, it is the turn of Siddharamaiah to meet the former Director General and Inspector General of Police. The CM called on Revanasiddaiah at his house in Whitefield before leaving to New Delhi from the HAL Airport at 2.30 pm to meet the party High Command leaders and to finalise the party candidates list.

Sources said that the CM told the former Police officer that his son Yathindra was contesting from Varuna and he needs his (Revanasiddaiah’s) support. He requested Revanasiddaiah to bury past differences and help his son to win the election.

Revanasiddaiah told the CM that he and his supporters had worked for his electoral victory in Varuna in 2006, 2008 and 2013. Despite this, the CM had neglected him (Revanasiddaiah) and had not bothered to recognise his contributions, sources revealed.

Revanasiddaiah conveyed the displeasure of the Lingayat community over the neglect of their leader (Revanasiddaiah) “I never hankered for political posts. But I felt neglected despite all the efforts that helped you to reap political gains for over 12 years. How could you, being in the top post in the State, forget the contributions of the community,” Revanasiddaiah questioned the CM, sources said.

Expressing his displeasure over being sidelined, Revanasiddaiah told the CM that he had dedicated his entire energy and mobilised the community that helped the CM win the elections in Varuna. Revanasiddaiah asked the CM to come to Varuna and meet his (Revanasiddaiah) supporters and discuss the issues.

Responding to Revanasiddaiah, the CM asked the former IPS officer to forget the differences and help Yathindra to win the elections. Revanasiddaiah replied that the call will be taken by his community members at Varuna, sources said.

Following the discussion between the CM and Revanasiddaiah, it was decided that a meeting will be organised at Varuna either on Sunday (Apr. 15) or Monday (Apr. 16) and the CM will attend it along with Revanasiddaiah.