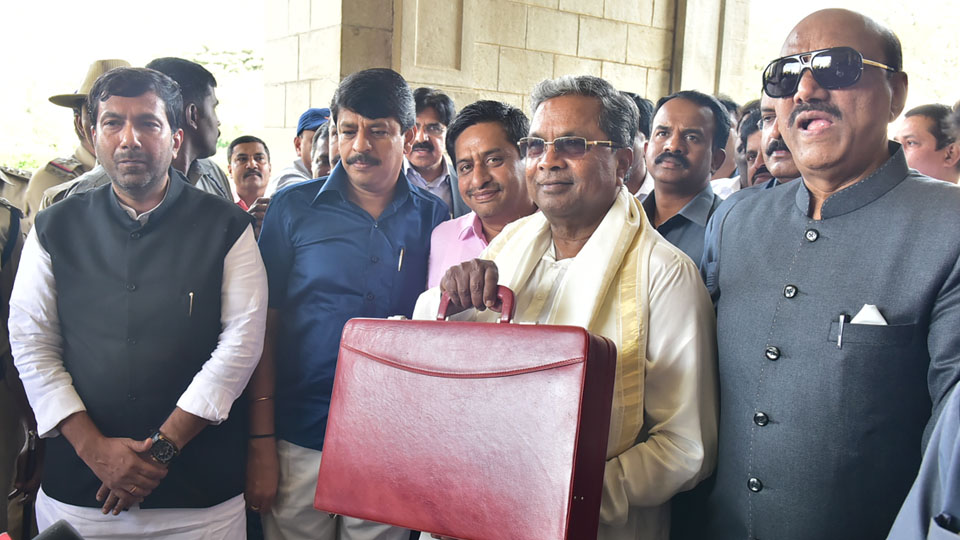 What’s in store for Mysuru?

Bengaluru: Ahead of the Assembly elections in Karnataka, Chief Minister Siddharamaiah presented his government’s last budget yesterday. It was not to be a full-fledged budget but a vote-on-account budget. This is also Siddharamaiah’s 13th State Budget presentation as the Finance Minister.

In his 4-hour-10-minute-long non-stop Budget speech, Siddharamaiah did not disappoint Mysuru, his hometown and as he has plans to contest from Chamundeshwari constituency, the CM has taken enough care and has announced a series of projects and allocations to Mysuru.

Non-allocation and not sanctioning of projects to Mysuru would have provided ammunition to his critics to target him at election rallies. By announcing new projects, Siddharamaiah has attempted to silence his    detractor.

Siddharamaiah has announced that a ‘Mysuru Haat’ will be developed in Mysuru on the lines of ‘Delhi Haat’ located in New Delhi. ‘Mysuru Haat’ will be developed on the land belonging to Karnataka Exhibition Authority. It promises to eliminate middlemen in the artisan-end user route and will provide an opportunity to local artisans. If ‘Mysuru Haat’ becomes a reality, Mysuru will have two such facilities. The city already has ‘JSS Urban Haat’ at Hebbal where year-long art and handicrafts exhibitions are held.

The proposal to convert Rashtrakavi Kuvempu’s house ‘Udayaravi’ at V.V. Puram into a museum received a stamp of approval in the Budget. Siddharamaiah said that the late poet’s residence will be preserved and developed as a national poet monument. The purpose of the monument aims to introduce the thoughts of the great poet to the next generation, he added.

Under new schemes, the CM announced that the State is proposing to develop Sericulture Tourism (Seri Tourism) on the Bengaluru-Mysuru Corridor in collaboration with the Central Silk Board. An international level “live museum” will be established in the sericulture area of Channapattana, he said.

Two units of Jayadeva Institute of Cardio Vascular Sciences and Research have been commenced at Kalaburagi and Mysuru at a cost of Rs. 225 crore and a cancer treatment unit will be established at an estimated cost of Rs. 15 crore each in Hassan, Mysuru and Karwar, he said.

“The district stadiums of Udupi, Mysuru, Kalaburagi, Gadag, and Shivamogga have been equipped with high-standard sports facilities in different ‘Sports Hub’ model and sports facilities are being upgraded in all districts stage by stage,” he announced.

“Comprehensive development works being undertaken at Chamundi Hill, Mysuru at a cost of Rs. 87 crore will be completed by March 2018. We are establishing six exclusive Women Industrial Parks at Thandya-Mysuru, Harohalli, Kanakapura, Kudithini-Ballari, Gamangatti, Dharwad, Nandur Kesartegi-Kalaburagi, and Canara-Mangaluru,” he said.

Intelligent Transport System (ITS) has been implemented in Mysuru City Transport. Mobile application has been released to provide exact information to the passengers about the buses. Smart Card facility has been provided to passengers in Bengaluru Metropolitan Transport Corporation, he revealed.

To curb the increasing number of motor vehicles and to control air pollution caused by the urban transport sector, public bicycle sharing system (Trin Trin) has been put in place for public in Mysuru. Mysuru city has bagged the National-level ‘Special Award’ for implementation of this scheme. “With the success of the Mysuru Public Bicycle Sharing System project, the Government will implement the same in Bengaluru,” the CM said.

9 COMMENTS ON THIS POST To “CM’s Poll Budget: Bounty for Mysuru”