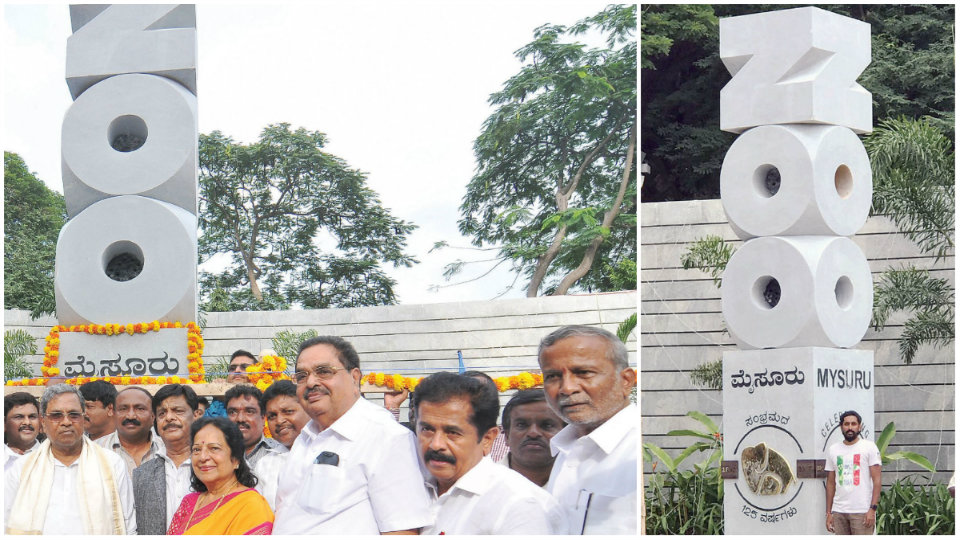 Mysuru: The 125th anniversary celebrations of Sri Chamarajendra Zoological Gardens or Mysuru Zoo got off to a start yesterday with Chief Minister Siddharamaiah launching the year-long celebrations. Incidentally, this was his first visit to the Zoo after becoming the Chief Minister.

Mysuru Zoo has been attracting visitors from across India and abroad, the CM said and called upon the Zoo authorities to come out with night safari to make the Zoo more attractive. “Many more varieties of animals and birds should be brought, and more facilities should be added,” he said.

After inaugurating the Vanyaranga Mandira, the amphitheatre inside the Zoo, he promised to provide Rs. 25 crore to the Zoo to develop Central Parking Hub on the land earmarked for it on the Expo Grounds.

Earlier, Zoo Authority of Karnataka Chairperson Mallige Veeresh had urged the CM to provide funds for the parking hub, the Chamundi Animal Rescue and Rehabilitation Centre at Hootagalli and also for completion of works on aquarium in the Zoo. The chairperson also urged the CM to take measures to regularise the services of contract workers who are working for the past two decades.

Remembering his childhood days when he used to visit the Zoo, Siddharamaiah said, “When I was in class 5 or 6, I visited Mysuru Zoo on a school trip. I visited it even when I was in high school. It’s nice to see many changes in the Zoo over the decades, especially the greenery,” he said.

The CM released a documentary film on Mysuru Zoo and also special postal envelopes and stamp. The film, in both Kannada and English languages, gives detailed information about the Zoo as well as wildlife.

Siddharamaiah took a tour of the Zoo along with Cabinet colleagues H.C. Mahadevappa, B. Ramanath Rai, and U.T. Khader in a battery-operated buggy, which was driven by Zoo Executive Director C. Ravishankar.

A youth urged the CM to help him secure a job in the Zoo on compassionate grounds. The son of a former Zoo employee, the youth pointed out that his father (Kurubarahalli Nagaraja) had died 20 years ago and though he has received an order to this effect, officials have not given him the job.

Siddharamaiah said that there was a process involved in such appointments.

“The case should come under Cadre and Recruitment Rules. It’s the same with 200 temporary employees,” he said, and asked Forest Minister Ramanath Rai, who was sitting next to him, to speed up the process and provide justice to temporary employees working at the Zoo. “Lower-rung employees play an important role. It’s a task to protect e animals in such a large facility,” the CM said.

Chief Minister Siddharamaiah, who taught Kannada grammar to his colleagues during an Assembly session recently, continued his classes at the Zoo too. At the beginning of his speech, he asked the crowd: “Which ‘sandhi’ is ‘Mruga’ plus ‘Aalaya’?” (Mrugalaya is the Kannada word for Zoo) When the audience answered that it is ‘Savarna Dheerga Sandhi’, he explained what it is grammatically. He also explained to them about ‘Guna’ ‘Sandhi’, much to the joy of the audience.

When the CM called upon the Zoo authorities to come out with night safari, Mallige Veeresh said that they were planning to have it in the premises of the Race Course after getting land there. To this, Siddharamaiah said a case on Mysuru Race Course is in court.

The matter assumes significance given that there are demands to shift the Race Course to the outskirts of the city so that the prime land is used for the expansion of the Zoo. But there is also opposition to the suggestion on the grounds that it will mar the beauty of the city.

Chief Minister unveiled a 20-feet-tall commemorative stone plaque marking the 125th year celebrations of Sri Chamarajendra Zoological Gardens that was opened in 1892. The stone is a 4-D sculpture and has been carved with soap stone that was brought from Bengaluru.  Words ‘ZOO’ has been carved and the dates 1892 – 2017 have been carved in bronze on the pedestal. Rosewood has also been used to carve other inscriptions on the plaque.

Speaking to Star of Mysore, Arun Yogiraj, who carved the 4-D sculpture, said that the structure was carved in 20 days by a team of 12 sculptors who worked in three shifts. While the sculpture’s height is 20 ft, its width is 3.5 ft. It weighs 24 tonnes.

To make the CM’s visit to the Zoo memorable, the Zoo authorities had arranged the ‘naming ceremony’ of a 15-day-old female elephant calf and Siddharamaiah performed the task and named it ‘Parvathi’. Coincidentally, Siddharamaiah’s wife’s name is also Parvathi. The CM called out “Parvathi” on a mike to symbolically name the elephant. The name “Parvathi” was suggested by the Zoo keepers as the calf was born to Asiatic Elephant pair Abhi and Airavathi after 13 years on the last day of Ashada Friday.