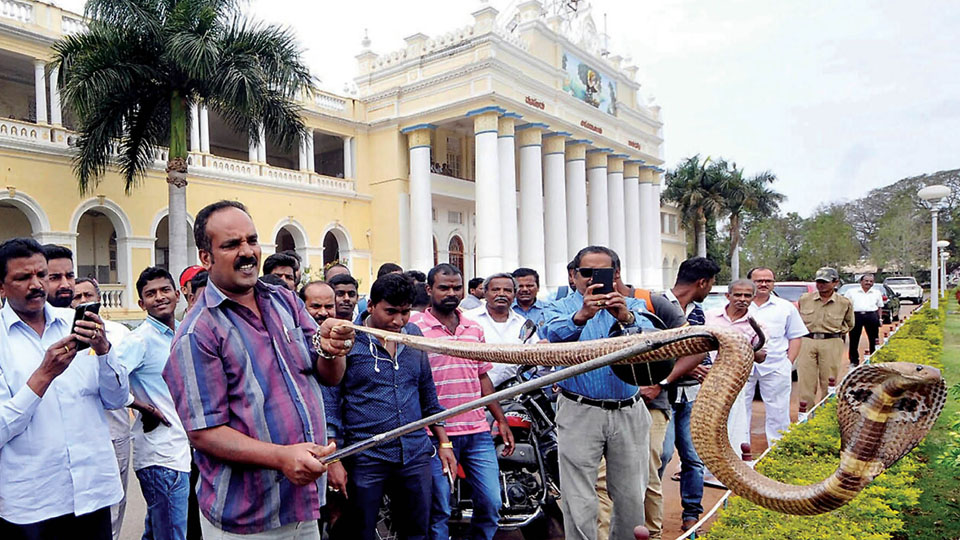 Mysuru:  There was sudden buzz in the precincts of the majestic Crawford Hall, the administrative offices of the University of Mysore. The excitement mounted when a student shouted that he had seen a snake slithering into a bush in the lawn opposite the steps of the Crawford Hall.

The University authorities immediately called Snake Ramesh, a resident of Ramakrishnagar, who arrived at the spot and after water was sprayed into the bushes, the snake appeared and lifted its head. The people who had gathered started clicking photographs, as the Spectacled Cobra opened its hood.

Later, Snake Ramesh speaking to Star of Mysore said that the spectacled cobra was five feet in length and added that he had caught more then 10,000 snakes so far. people clicking photographs as the Cobra spreads its hood

“This is the fourth snake I have caught in Crawford Hall and the first Cobra. The earlier three were Rat Snakes which are non-venomous. It must have come in search of insects and some other food,” he said and added “I will release it into the nearby forest.”

The snake which was found at 12 noon was finally caught after half an hour of operation.