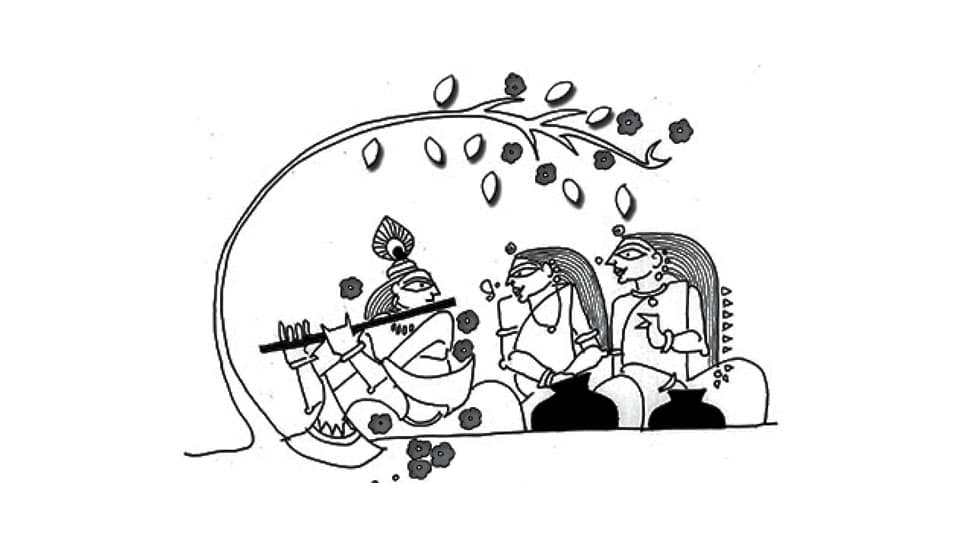 In the Sanskrit Valmiki’s Ramayana, Hanuman describes Ram as ‘shyama-varna’, which means one of dark-complexion. In folk poetry, poets describe Krishna as ‘ghana-shyam’, as dark as monsoon clouds. Yet, in our most popular art, we find Ram and Krishna visualised in blue colour. So, we wonder, are they black, and blue, or only blue? One is met with a stony silence.

In the old temples in the Gangetic plains, such as the Banke Bihari Temple in Vrindavan, Krishna images are carved of black stone, and they stand in stunning splendour, bedecked with flowers and fabric. Often, in stark contrast, the image of Radha is made of marble, or bronze. He the dark-one; she the fair one. However, in many new temples, people are increasingly choosing images of Krishna in marble over black stone.

There are cave paintings suggesting two men on a chariot. Is that Krishna and Arjuna? We can only speculate. The earliest Krishna literature, the Mahabharata, tells tales of Krishna’s adulthood. There, Draupadi is referred to as Krishna, the dark complexioned lady. That would make Krishna, the dark complexioned man. This is about 2,000 years old. In Bhakti literature, that is less than a thousand years old, Krishna’s beauty becomes the object of veneration. He is increasingly linked to dark monsoon clouds and to blue lotuses. His dark complexion in the full moon night is the subject of poetry.

The earliest images of Krishna are probably Indo-Greek coins, nearly 2,000 years old, showing a man holding a wheel. Then come the Gupta stone statues, about 1,500 years old, showing a hero fighting a horse, most probably Krishna fighting Keshin. The earliest paintings of Krishna probably come from miniature art that flourished around temples, like the patta-chitra around Jagannath Puri Temple of Odisha. The image enshrined in the temple is made of wood and covered with paint, refreshed almost daily. Here, Jagannath, who is simultaneously Vishnu, Ram and Krishna, is painted with black soot. In the paintings made in nearby villages by artisans, Krishna is depicted in black colour.

About 500 years ago, Persian miniature painting was introduced by the Mughals and became widely popular in North India, influencing the Pahari School of Painting and the Pichwai School of Nathdwara Temple. Here, Krishna can be seen distinctly as blue: light blue of the day sky, not the dark blue of the sapphire. The images of Krishna, Ram and Vishnu, on the grand gopurams of South India, show them as blue, even though in early Tamil songs of the Sangam period there is reference to the dark beloved pastoral God, Mayon, believed to be an early form of Krishna.

Folk songs repeatedly refer to the contrast between the dark Krishna and the fair Radha, or the dark Vishnu and the fair Shiva. When did the natural black become the supernatural blue? Does this something have to do with India’s infamous discomfort with the dark complexion? In China, the tanned complexion is seen as inferior, as it is indicative of the peasant who works in the sun.

India too is an agricultural country and may have shared such prejudices. After all, the princess ‘untouched by the sun’ or a-surya-sparsha, is an object of fascination in folk tales.

Wandering in the forest during exile, and wandering in pastures with his cows, may have tanned Ram and Krishna. But, before the sun had its way, was their skin black, brown or blue?