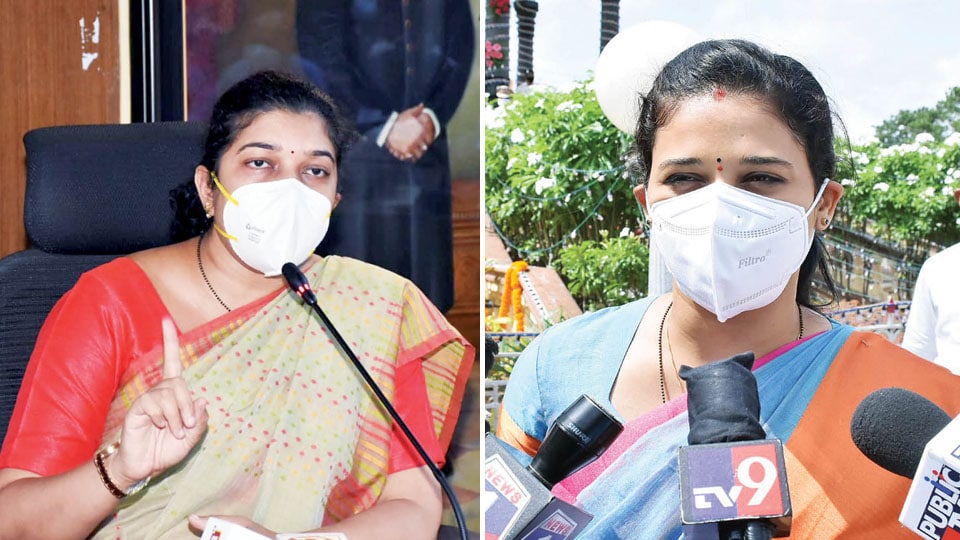 Mysore/Mysuru: Former Mysuru DC Rohini Sindhuri has sought disciplinary action against IAS Officer and former MCC Commissioner Shilpa Nag for violating the provisions of the All India Service (Conduct) Rules, 1968,  by her conduct.

Sindhuri has lodged a formal complaint with the Chief Secretary, Department of Personnel and Administrative Reforms (Services) on June 6 where Rohini Sindhuri has stated that Shilpa Nag’s “pre-meditated plan” was to falsely raise allegations against her and “create a scandal in order to force her transfer from the district.”

She contended that Shilpa Nag’s conduct was “unbecoming” of an IAS Officer amounting to “gross misconduct and indiscipline.” She refers to the former MCC Commissioner’s interview to a private television channel where she stated that her mission of ensuring my transfer from Mysuru district had been accomplished and the purpose of doing the press meet was that.

Interestingly, Shilpa Nag held her press meet on 3.6.2021, just a day  before Rohini Sindhuri was set to order the cancellation of the Lingambudhi Lake land for commercial purpose.

While Rule 3(1) states that “every member of the Service shall at all times maintain absolute integrity and devotion to duty and shall do nothing which is unbecoming of a member of the Service”; Rule 3 (2B) (XI) states that “maintain discipline in the discharge of duties and be liable to implement the lawful orders duly communicated to him,” she explained in the letter.

“Also some politicians, in collusion with private hospitals, were overcharging patients while running Private COVID Care Centres in violation of prescribed norms and committing gross irregularities. I had ordered their closure. This was an another immediate cause for motivated and false attacks on me,” Rohini said in the letter.