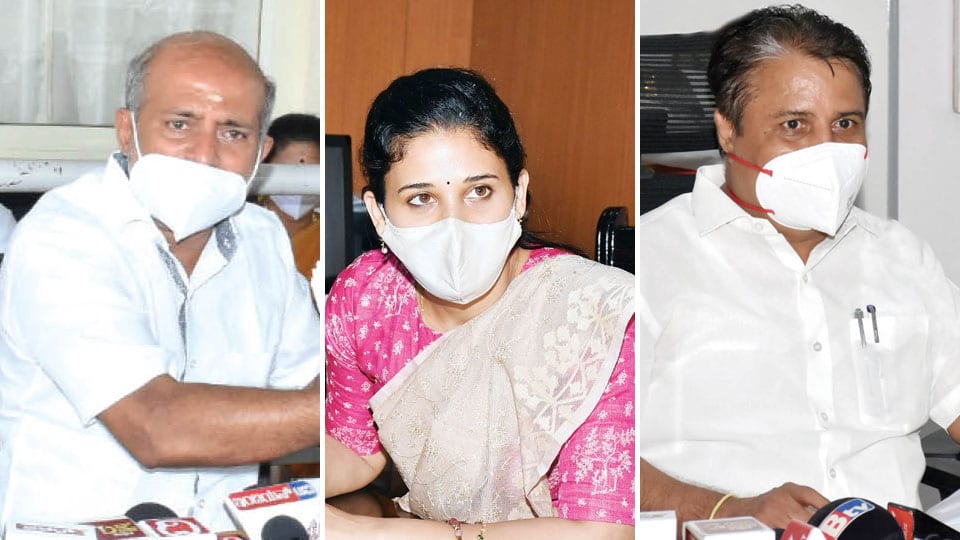 Where were these people 10 years ago? What did they do to reach such a stage? Did they set up an industry? What hard work have they done to reach the level that they are in today?” she questioned.

As MUDA Chairman, Rajeev has passed more than 500 resolutions in a meeting he chaired. An investigation must be launched on all the resolutions passed by him.”

Speaking in an audio released by a local channel on social media, Rohini Sindhuri is heard saying that the list of irregularities and illegalities by Mahesh and his associates in Mysuru and its neighbourhood was long.

“These people threaten officers not to take action against their illegal dealings. The MUDA Chairman is his partner in a few illegal projects like the one on the Lingambudhi Lake where they had plans to build a five star hotel,” she has said.

“Where were these people 10 years ago? What did they do to reach such a stage? Did they set up an industry? What hard work have they done to reach the level that they are in today?” she questioned.

“When I took over as DC of Mysuru, many people furnished documentary evidence on the illegalities. They asked me to read T.M. Vijay Bhaskar’s Report and I have read it. I was shocked to see the way illegalities have grown over the years, especially in Mysuru. When I wanted to initiate enquiry, Dasara came and after that the first wave of COVID struck,” she revealed.

For the record, T.M. Vijay Bhaskar was the DC of Mysuru and is known for his honesty. He rose to become the State Chief Secretary and now he is retired.

“When Mysuru took a respite from the first wave, I decided to launch a probe into the land deals and focus on tourism. But then came the second wave. I had sought certain documents from MUDA earlier and those started coming in just days before my transfer. I have released the same and I have initiated  action,” she said.

500 resolutions in a meeting !

“As MUDA Chairman, Rajeev has passed more than 500 resolutions in every meeting he chaired. An investigation must be launched on all the resolutions passed by him. It is these people who conspired to transfer me. Earlier, I had not named anybody. But now that they are exposing themselves by attacking me, I am naming them,” the  IAS Officer said.

I am not scared of them…

“Since the day I joined and even now after I have been transferred, the MLA has been incessantly making false allegations against me. The whole modus operandi is to threaten and scare officers so that they do not take action on illegality. But I have paid no heed and so even after my transfer he is making statements against me. They know that public opinion is tilted heavily on my side and they are fabricating audio records, remixing them and releasing them to the media. I was not scared of them when I was in office, you think I will be scared of them now? ” Rohini Sindhuri asked.

The IAS Officer said that since documents were asked, some of them have been released. “Prima facie there are irregularities and hence they need to be inquired into and taken to the logical conclusion. Former MCC Commissioner Shilpa Nag has colluded with politicians and did a resignation drama, just to get me out and serve their purpose. Her nexus with the politicians must be probed,” she added.