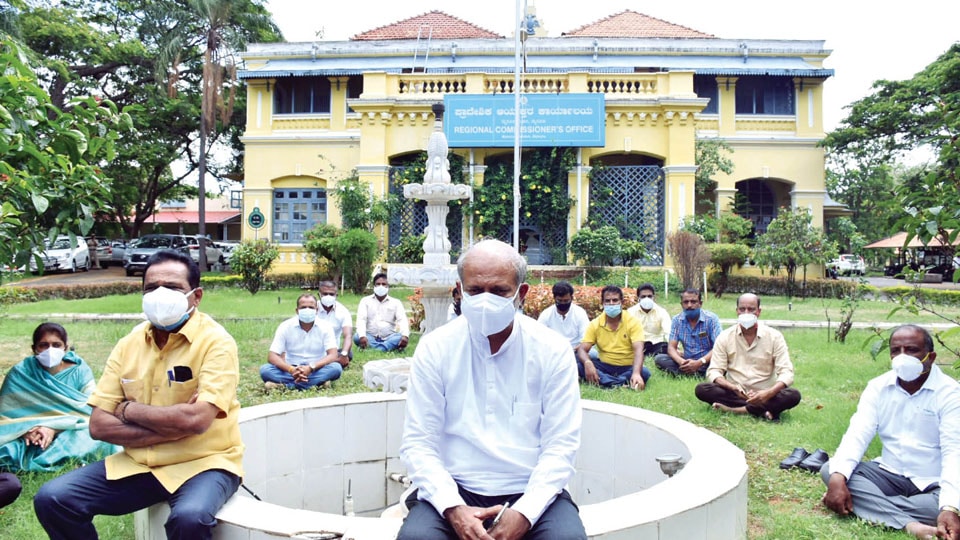 Mysore/Mysuru: JD(S) MLA from K.R. Nagar in the district, S.R. Mahesh this morning staged a demonstration in front of the Regional Commissioner’s (RC) Office on Hunsur Road in protest against the charges made by IAS Officer Rohini Sindhuri, who was the Mysuru DC earlier, that Sa.Ra. Convention Hall at Dattagalli was built on encroached land that was once a Raja Kaluve.

Terming the four documents displayed by Rohini Sindhuri in support of her allegations that huge areas of lands were encroached upon in and around the city by politicians and also the Sa.Ra. Convention Hall owned by him at Dattagalli was built by encroaching Raja Kaluve, as totally false, Mahesh declared  that he would handover the property to the Governor, if even a small water pond or a bullock cart path is found to have earlier existed at the Convention Hall site.

“I am publicly declaring that Sa.Ra. Convention Hall will be handed over to the Governor if the charges are proved beyond doubt. I will also resign as MLA and quit from public life without any delay,” he said.

Alleging that Rohini Sindhuri was acting on a complaint filed by an  RTI activist,  alleging that lands coming under Survey Nos.124/2, 123, 115 and lands in other places were encroached upon by politicians, Mahesh claimed that the four documents displayed by Sindhuri was aimed only at targeting political leaders of Mysuru.

Demanding a high-level probe into charges of land encroachment against him, Mahesh challenged Rohini whether she would quit IAS and return to her home State Andhra Pradesh, if her charges are proved false.

Regional Commissioner (RC) Dr. G.C. Prakash received the memorandum from Mahesh.  The RC sought three days time to conduct a probe and to get a report. Mahesh called off his protest after the RC’s assurance but warned of protest on Monday if the probe is not conducted by then.

Speaking to media Dr. Prakash said that the MLA has submitted documents in support of his claims that there is no encroachment of land on which Sa.Ra. Convention Hall is built. Pointing out that these documents will be verified and  scrutinised, he said that a three-member committee comprising Additional DC, Deputy Director of Land Records and Tahsildar will be tasked with  carrying out a survey and submit a report by Monday.

The report will be forwarded to the Government for further action, if any, he added.