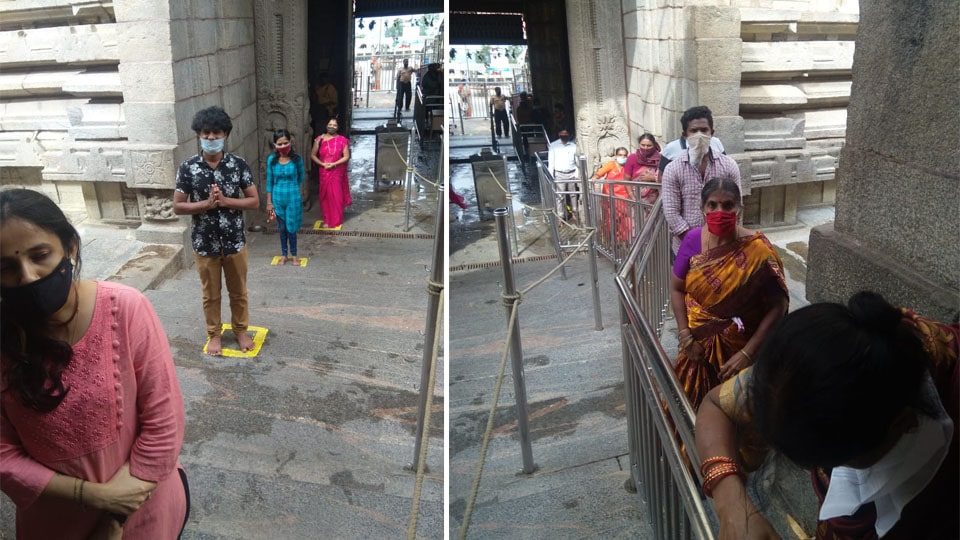 Complete ban on entry to Chamundi Hill during Ashada Month?

Decision to be taken after assessing the crowd at Hill Temple today and tomorrow: DC

Mysore/Mysuru: In view of the ongoing COVID-19 regulatory measures in city, this year devotees will not be allowed to take part in special puja celebrations, which is going to be held on the occasion of Ashada Fridays (June 26, July 3, 10 and 17) and Chamundeshwari Vardhanti Mahotsava (July 13) atop Chamundi Hill temple.

Speaking at a press conference held on Saturday, Deputy Commissioner Abhiram G. Sankar said, “Further decision will be taken about not allowing devotees to Chamundi Hill on all other days in the month of Ashada Masa after assessing the number of visitors present on June 22 (Monday), which is the first day of Ashada month according to Hindu calendar as well as on Tuesday. Every year, thousands of devotees visit the temple to have darshan during Ashada month as special puja will be offered to the deity during this auspicious month, in particular on Tuesdays and Fridays. In the backdrop of COVID-19 pandemic, the District Administration had earlier announced that devotees will not be allowed to have darshan of the deity at the Hill Temple on all Ashada Fridays this year.”

“Meanwhile, Chamundi Hill residents have urged the administration to not allow visitors to the Hill for the whole month. We will assess the situation and the number of visitors present on Monday and Tuesday. If there is a large crowd, we will take further decision regarding allowing devotees on all other days during this auspicious month, as there are chances of infection spread,” he said.

“District Administration has also imposed restrictions in all other temples in city on Ashada Fridays and Vardhanti Mahotsava, as devotes will assemble in large numbers on these auspicious days. In case there is uncontrollable crowd, we will close down any temple in city including those coming under Muzrai Department,” he added.

Steps leading to Hill temple to be closed

“During Ashada Fridays and Vardhanti Mahotsava, devotees have a practice of applying ‘arishina-kumkuma’ (turmeric-vermilion) to every step of Chamundi Hill as part of their vow. If the residents of the Hill request in writing not to allow devotees here too, we will have to ban entry of devotees from the steps too,” said DC Abhiram Sankar.

Stating that it has been a practice for many organisations and associations to place a portrait of the Goddess and perform puja on the road sides, the DC said such practice too is prohibited this time and there is ban on ‘anna santarpane’ (mass feeding) and prasadam distribution also.

He warned of action against those violating any of these rules.