Home » Columns » COVID Wedding and After 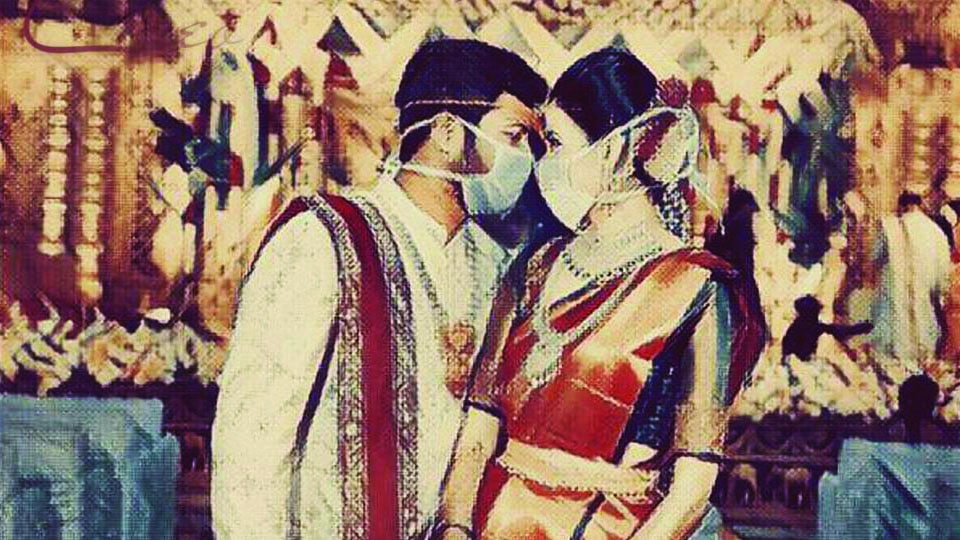 COVID Wedding and After

Life has become austere, especially weddings. COVID-19 has taken us back to 1960s India when Lal Bahadur Shastri chose to impose rationing and limiting guests at events.

Just like how today Government allows no more than 50 guests at a wedding, back then only 25 guests were allowed including the hosts! So apart from the bride and groom’s Papaji, Mummyji, Dadaji, Chachaji and a few other jis, Pandithji was the only outsider allowed.

Similar effort to bring about a sense of austerity is being done in Delhi now. The Supreme Court has asked the Delhi Government to formulate a policy to stop food wastage and manage social functions in Delhi. And so a ‘Policy for Holding Social Functions in Hotels, Motels and Low-Density Residential Areas (LDRA) in National Capital Territory of Delhi’ has been prepared.

According to this policy, one has to first get approval from the Urban Local Body (ULB) for the number of guests they plan to invite. The approval is based on the size of the venue and parking capacity. The number of guests cannot exceed the guest limit approved by the ULB.

Then, the caterer for the event should have registered with an NGO and make proper arrangements to handover surplus food to these NGOs so it can be used to feed the poor. The caterer must also display his licence issued by the Food Safety and Standards Authority of India (FSSAI) at the venue.

Then, the wedding party cannot use any horse-driven carriage or band outside of the venue and the organiser has to segregate the waste at the venue before disposal.

The Policy is indeed very progressive and could be applied pan India. But do implementing authorities understand the spirit of this policy? Or will it lead to corruption? Could this well-intentioned policy end up like a version of ‘Delhi Guest Control’ and ‘Delhi Catering Orders’ of the 1960s and 70s?

READ ALSO  ‘COVID Heroes’ in their own right: Students develop portal for information at fingertips

This reminds me of an anecdote mentioned in a research paper by Tarangini Sriraman, a Professor at Azim Premji University. She writes of one Madanlal Mehta, who served as an Inspector and later Food and Supply Officer roughly from 1965 to 1980 in the Delhi Food and Supplies Department.

It seems, once a person came to Mehta to tip him off about a violation that would occur at a wedding hosted by a man who ran a crockery shop in Karol Bagh. Mehta dragged himself unwillingly to the site of the wedding at Kirti Nagar to inspect the catering arrangements and the guest list.

On arriving there, he came to know that the bride’s father was already facing 8 different complaints in connection with the wedding. Someone had come to press charges against him for using unauthorised electricity, someone else to question his “unauthorised use” of his own garden and so on.

Mehta says, “It was clear that the man had invited more than the stipulated number of guests and rationed items were used to cook indiscriminately, but I felt a lot of compassion for the bride’s father who was under a lot of pressure on so many fronts. So I shouted at him and pretended to be angry. But I gestured to him to simply give me the samples which I inspected and reported as revealing no violation.” Mehta went back to his office and made an entry in his Daily Diary that there was no violation at the wedding.

Mehta’s story does not end there. He adds, ‘Mujhe baad me patachala ki apniladkikosasuralbhejneke baad ekghantekeandar hi, wohbechara mar gaya’ (I later learnt that just an hour after he had sent his daughter to her husband’s house the poor man died). Yes, Government agencies can induce such enormous stress that it can prove fatal.

Now, while Supreme Court has the right intentions, can this policy be implemented without bringing back a sense of Licence Raj and Corruption? Will food wastage stop? Will weddings stop blocking traffic? Worse, in these COVID times when jobs are disappearing faster than the virus is spreading, will the wedding industry, that employs lakhs of people, disappear?

Most of us love to hate opulent weddings, but let’s not forget it employs people. Lots of people; from flower vendors to fashion designers; from cleaners to jewellers; from beauticians to cooks; from pandits to paanwallahs.

The big fat Indian wedding is a big fat contributor to the economy. According to the accounting firm KPMG, after the United States at 70 billion dollars, India has the next biggest wedding industry in the world at 50 billion dollars, which is about Rs. 35,000 crore. And COVID has wiped it clean.

That said, one good outcome of COVID wedding has been for the poor and the middle class who are otherwise forced to spend money on weddings to show status just as the wealthy do.

In our country, poor people take loans from private financiers to host weddings beyond their means leaving them trapped in debt. Now thanks to COVID and astrologers, who insist on the dates, poor people can save some money by avoiding big weddings without losing face.

Meanwhile, let’s hope grand weddings return, albeit with certain regulations so as to stop wastage and pollution.  After all, a lot of people’s livelihood is dependent on people celebrating the beginning of their new lives.