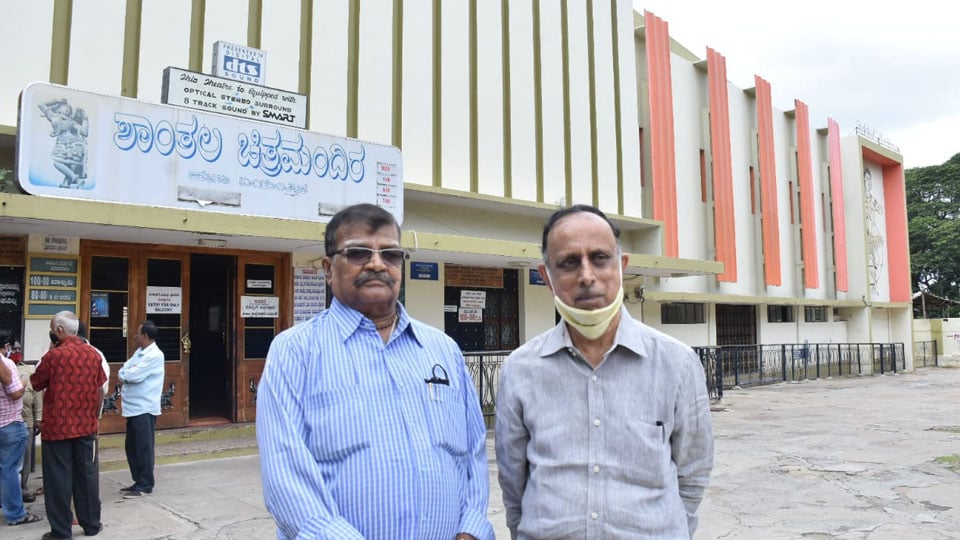 The show may not go on for many city theatres

Mysore/Mysuru: The COVID-19 pandemic has dealt a bitter blow to the already fragile entertainment industry. While theatre owners, employees, actors and backscreen staff are desperate to be re-united with their audiences, re-opening cinema halls is not high on the Government’s agenda.

Closed since March according to the Ministry of Home Affairs guidelines, cinemas will only be allowed to re-open in the last phase of the Unlock 1. This has directly hit the survival of theatres — both single screen and multiplexes. In Mysuru, the landmark and most-loved Shanthala Theatre has announced that it will not re-open even after the Government permits opening of cinema halls.

Though only Shanthala has made a public announcement that it will stop movie-screening, many other theatre owners too are inclined to diversify their business as they are suffering huge losses and the Government is not yet talking about re-opening cinemas.

Shanthala Theatre’s closure has come as a rude shock to other theatre owners, cinema-goers and distributors. In fact, since March, cinemas in Mysuru have laid off their part-time employees and have even asked full-time employees to go on leave without pay. While those who are still working, took steep pay cuts to keep their jobs.

Iconic theatres that have catered to the cinema craze of Mysureans since many decades and other single-screen theatres are bearing the brunt of the pandemic and the lockdown as there is no revenue since over three months. Day-to-day maintenance too is becoming an arduous task for them.

There are 13 single-screen theatres in Mysuru city and three multiplexes housed in shopping malls. In the district, there are 36 theatres. Earlier in the city limits there were 21 theatres and now only 13 are functional with the rest selling off properties or diversifying their business models.

Karnataka Film Exhibitors Federation Vice-President M.R. Rajaram told ‘Star of Mysore’ that cinema theatre is the only business that has to obtain operation permission and fitness certificate from Fire, PWD, Health, Electricity Departments and a final No Objection Certificate from the Deputy Commissioner.

“Taxes are rather heavy in Mysuru when compared to Bengaluru. Every year, theatre owners pay Rs. 30,000 as trade licence fee to the Mysuru City Corporation (MCC) and Rs. 3 lakh to Rs. 10 lakh goes as property tax depending on the size of the building and extent. Also there are other taxes and fees like the licence fee of departments. Each theatre in Mysuru pays anywhere between Rs. 1 crore and Rs. 1.5 crore as taxes to the Government. Also, we need to look after theatre maintenance and staff salary. How are we supposed to function,” asked Rajaram.

If the theatres are allowed to open following social distance norms, they could have managed. But in this situation where the cinemas are not allowed to function, it is difficult to survive. “Theatres and Choultries in Mysuru actually pay commercial property tax more than what their counterparts in Bengaluru and rest of Karnataka pay. This issue is in the Court now as our many appeals to the MCC have fallen on deaf ears,” he added.

The movie theatre experience — complete with surround sound, visual effects, snacks and refreshments —- has thrived over years but now things are changed. The cinema industry is in doldrums and theatres and multiplexes are worst affected as they are not permitted to open, said C.R. Hanumanth, Proprietor of DRC Cinemas.

“In a situation where we are not allowed to operate, cleaning and maintenance work including the complicated screen maintenance has to go on and staff salary has to be paid. How are we supposed to survive? The Government must allow us to operate with guidelines or rules. Even if we are allowed to screen cinemas, there is a fear that people may not come to watch movies. Going by the footfall at malls, cinemas’ footfall is going to be even lower. But somewhere we have to start as a confidence-building measure,” he added.

N.M. Padaki, who owns Shanthala Theatre, told ‘SOM’ that the cinema hall was started in 1974 after taking land on lease from an Orphanage Trust. “When the initial 30-year lease expired, we appealed to the Trust to renew the lease. Now the Trust has not permitted us to again renew the lease. So we have no other option,” he revealed.

The last cinema that was exhibited in Shanthala was ‘Shivaji Suratkal.’ Apart from being a landmark in the locality, most of the super hit movies used to be released here and there was no chance of tickets being sold in black. Also, decorum was maintained in the theatre and there was no opportunity for crowds to shout, whistle or jeer, thanks to its Manager Devaraj, who is called ‘Dynamic Devaraj.’

Devaraj used to vacate such people from the cinema hall and there was no chance for mischief-mongers to misbehave with women. Many cinemas in Shanthala has seen 100-day shows and Kamal Hassan’s ‘Swathi Muthyam’ has seen 365-day show, a record. Apart for Padaki, T.P. Subbarao is a partner in the theatre.

Reacting on the theatre closure, Manager Devaraj said that he is deeply pained by the development. “I joined Shanthala Theatre in 1978 and have an emotional bonding with the institution and also cinema lovers. Even during lockdown, all employees were paid full salary. But now, things have reached to closure state,” he added.