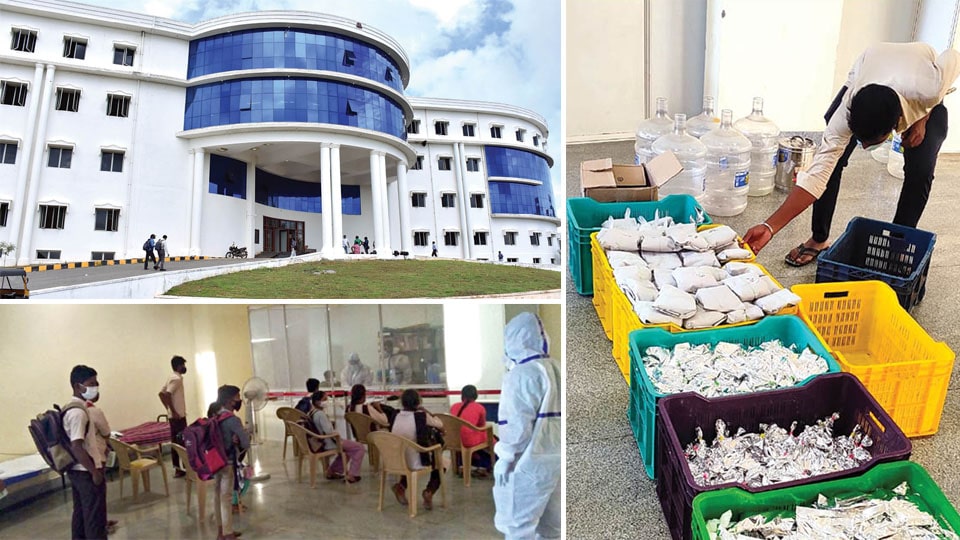 The COVID Care Centre (CCC) at Karnataka State Open University’s (KSOU) Academic Bhavan in Mandakalli has begun admitting the pandemic’s third wave patients and over 92 patients have been admitted there now.

Among the many COVID Care Centres (CCCs) that were established by the Mysuru District Administration, the KSOU CCC stands out with an impressive structure and spacious and well-ventilated rooms.

Since the last one week, the CCC has become a hub of activity with patients and the officials from the District Administration catering to their every need and at the same time ensuring that the patients get good and healthy food and warm clothing and blankets to save them from the early morning chill.

The building has 53 halls and several rooms. As per the guidelines of the Health Department and like in the earlier waves, 15 to 20 beds are arranged in each hall, with a gap of over two metres. All basic needs like bathrooms and toilets and hot water for bathing are offered here.

Notably, in the first and second waves, this CCC was well maintained and the patients did not have much to complain about. Spacious rooms, constant medical attention and good food made patients win their battle with the disease with ease. It was a model CCC in all possible ways.

This year too, the authorities are striving to make this a happy place to live and get rid of the infection. As of now, 700 beds have been arranged with the mandatory spacing between them instead of cramped spaces at other CCCs. For the general management of the CCC, H.S. Bindiya, District Officer, Backward Classes Welfare Department, has been appointed as the  Nodal Officer.

Three days back, over 100 people were admitted there and as some of them had recovered, they were sent to their homes. The excess patients from the designated COVID Hospital (District Hospital) are being sent here after proper evaluation. As of now, patients have been accommodated in the ground and first floor of the building and beds have also been arranged in the second and third floor to meet any emergency spike.

When compared to the first and second wave, the number of days that a patient is required to stay at CCCs have been reduced to four to seven days. In the earlier waves, the viral load was heavy and it required a minimum of 10 to 15-day hospitalisation and in the worst case scenario, many patients from the KSOU centre were shifted to the ICUs of other hospitals where the recovery rate improved.

Less days of CCC stay means more patients can be triaged and admitted, say officials and the number of patients will not be a burden. Also, there is no pressure on the administration and health officers to increase the number of CCCs. Officials and doctors told Star of Mysore that when compared to the first and second wave, the recovery rate is faster and this has been achieved by maximum vaccination.

“If there are certain medicines that are not available with the Government agencies, only then we will approach private players and as of now, we have not faced such an eventuality,” a doctor manning the KSOU CCC said.

Apart from stocking up on essentials and the items used by the patients for day-to-day cleaning and washing, care has been taken to ensure that the inmates stay positive with plenty of entertainment and recreation activities. There is a generator for uninterrupted power supply.

Though asymptomatic patients are being admitted to this CCC, arrangements have been made to supply oxygen and the unit has 30 oxygen concentrators, eight oxygen cylinders and in case of an emergency, an ambulance is stationed here at all times.

To clean the bed sheets, pillows and other materials used by the patients, a laundry unit has been set up and the unit can wash 150 blankets in one go. Such materials from the CCC at Beedi Workers Hospital also come here and are cleaned in this laundry unit, said officials.

“Here we have 17 CCTV cameras and security staff work in three shifts. There are separate sections for COVID warriors, children, students and also infected jail inmates. Every bed has a plug point to charge mobile phones. Apart from the regular diet, nutritious food like eggs, fruits, curds, kashaya and ragi mudde is given. Hygiene and cleanliness is a priority in this CCC and exclusive officials are deputed for the purpose. The phone numbers of health officers are displayed at every bed and they can call in emergencies. This apart, we have a 24-member team including doctors, nurses, group D workers and health inspectors for round-the-clock monitoring.” —H.S. Bindiya, District Officer, Backward Classes Welfare Department & Nodal Officer, KSOU CCC