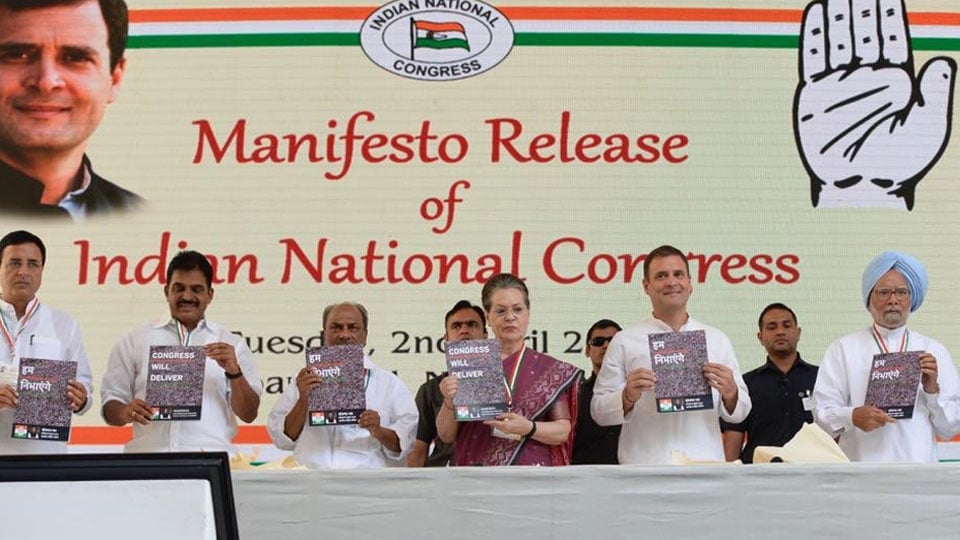 New Delhi: The Congress this noon released its manifesto titled ‘Congress will deliver’ for the ensuing Lok Sabha elections.

The manifesto was released in the presence of Sonia Gandhi, former Prime Minister Dr. Manmohan Singh, Priyanka Vadra and other leaders.

At the manifesto release, Congress President Rahul Gandhi said, “The manifesto is a massive step for Congress. When we started this process a year back, I told them that this manifesto should reflect the wishes of the people and whatever is present in the document should be truthful.”

Some of the key promises in the manifesto includes separate Kisan Budget, single slab GST and filling 22 lakh Government vacancies. Rahul Gandhi also said that the party will scrap NITI Aayog once voted to power.

Rahul said that the Congress manifesto also proposes to make loan default by farmers a civil offence instead of criminal one.

On his decision to contest from Wayanad, Rahul said, “There is a feeling of neglect in South India. I wanted to show them that Congress stands with them. As far as I can see, we have alliances with Left across the country and there is no problem on that ticket.”

Former Finance Minister P. Chidambaram, who headed the Manifesto Committee, said that the manifesto will set the narrative for the polls.

“The BJP may be the ruling party today but the party is trying to take the narrative to five years back …to divisiveness and hyper nationalism… Our manifesto is focussed on real issues of jobs,” Chidambaram said.