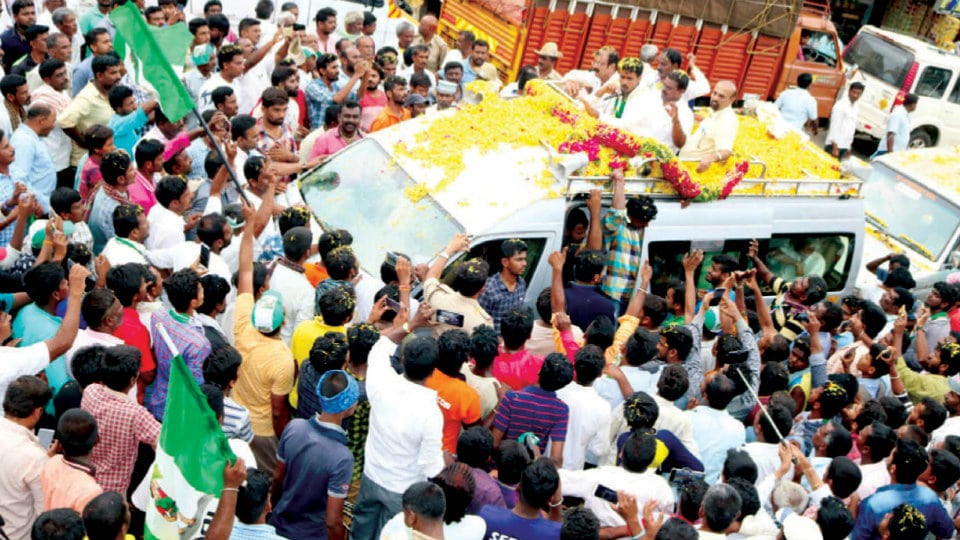 Nikhil urges farmers to give him opportunity to work for them

K.R. Pet: Stating  that he would work for the upliftment of farmers like his father Chief Minister H.D. Kumaraswamy and grandfather H.D. Deve Gowda, coalition candidate from Mandya Lok Sabha constituency Nikhil Kumaraswamy urged the voters to give him a chance to represent them in the Parliament besides to work for their betterment.

Stating that the State Government had sanctioned Rs.212 crore for Santhebachahalli Lift Irrigation Project, he said that the government authorities had floated tender for implementation of this work. Water will be released from Hemavathi Reservoir to fill water to lakes of Santhebachhalli hobli under this project.

Nikhil also assured the voters that he would strive hard for the  development of the region and ensuring electrification, better roads and other basic facilities. He asked the voters to elect him to the Parliament with a huge margin to upheld the dignity, pride and self respect of the people of Mandya.

Earlier, a rousing welcome was given to Nikhil Kumaraswamy with people showering flower petals on him, conducting bike rallies and taking him in a procession accompanied with folk troupe.

My father is my Star Campaigner:  Nikhil said that he would not bring cine stars for campaigning  in this election and not misuse the popularity of them. “My father Chief Minister H.D.Kumaraswamy is my star campaigner and my party activists are my soldiers who will take me to victory”, he said.

READ ALSO  Betting runs high on who will win Mandya

He also met Congress ZP Member Kodimaranahalli Devaraju at his residence and appealed him with folded hands to canvass for him .