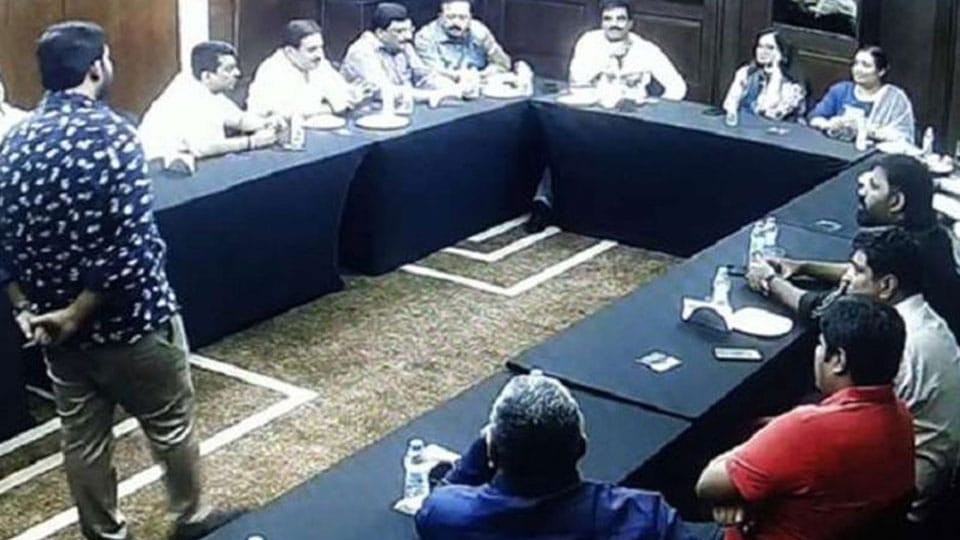 Mysuru:  Even as Mysuru District Minister G.T. Devegowda (GTD) claiming that JD(S) workers in Udbur village of Chamundeshwari Assembly segment supported BJP in Lok Sabha election has caused embarrassment to coalition partners, a video is doing rounds in social media where Congress rebel leaders from Mandya are shown attending a dinner meeting with Sumalatha Ambarish, who contested as an Independent candidate against Congress-JD(S) alliance candidate Nikhil Kumaraswamy in Mandya.

Congress rebels N. Cheluvarayaswamy and P.M. Narendraswamy (both former Ministers), former legislator H.C. Balakrishna, Ravi Ganiga and Malavalli Shivanna are among the prominent Congress rebels who were seen at the dinner hosted by Sumalatha at a star hotel in Bengaluru on Tuesday.

The meeting is seen as an indication that the rebel Congress leaders had worked in favour of Sumalatha in the bitterly fought election in Mandya. The video clip was aired by Kannada news channels yesterday.

Interestingly, some of the leaders who attend the dinner meeting are close followers of Co-ordination Committee Chairman Siddharamaiah. In fact, Cheluvarayaswamy and Balakrishna quit the JD(S) and joined the Congress in 2018 at the behest of Siddharamaiah.

These leaders had stiffly opposed the Congress’ decision to allow alliance partner JD(S) to field its candidate from Mandya. Besides, most of these rebel leaders have a running spat with JD(S) father-son duo H.D. Deve Gowda and Chief Minister H.D. Kumaraswamy. Despite efforts by Congress to convince them to work for Nikhil in the elections, the rebel leaders had indirectly supported Sumalatha.

In another development, GTD admitted that a section of JD(S) workers in Mysuru had worked in favour of BJP candidate Pratap Simha. “Delay in ensuring understanding between Congress and JD(S) workers led to confusion in parts of Mysuru. The joint campaign started with only five days left for polling,” he stated.

He said while Congress workers voted for their candidate C.H. Vijayashankar, the JD(S) workers voted for BJP in Udbur village, due to differences among them. “Despite, myself and Siddharamaiah speaking to JD(S) workers, they decided to support BJP at the last minute. There are two factions in Udbur and they do not listen to anyone. Except Udbur, the coalition was a success in other areas and Vijayashankar will win the polls,” GTD said. He opined that there should not be coalition for Lok Sabha elections. There was delay in nominating the candidates and lapses in following the coalition dharma, he said. Devegowda also said that the outcome of Lok Sabha elections will not have any impact on JD(S)-Congress coalition government.

Meanwhile, State Congress chief Dinesh Gundu Rao said it is not proper on the part of a Minister (G.T. Devegowda) to make such statements. Deputy Chief Minister Dr. G. Parameshwara said the Disciplinary Committee of the Congress will look into the rebel party leaders holding a dinner meeting with Sumalatha.

“The Committee will obtain reports from the Mandya unit of the party in this regard and will recommend appropriate measures. The party will take action against them based on the report,” he told reporters.