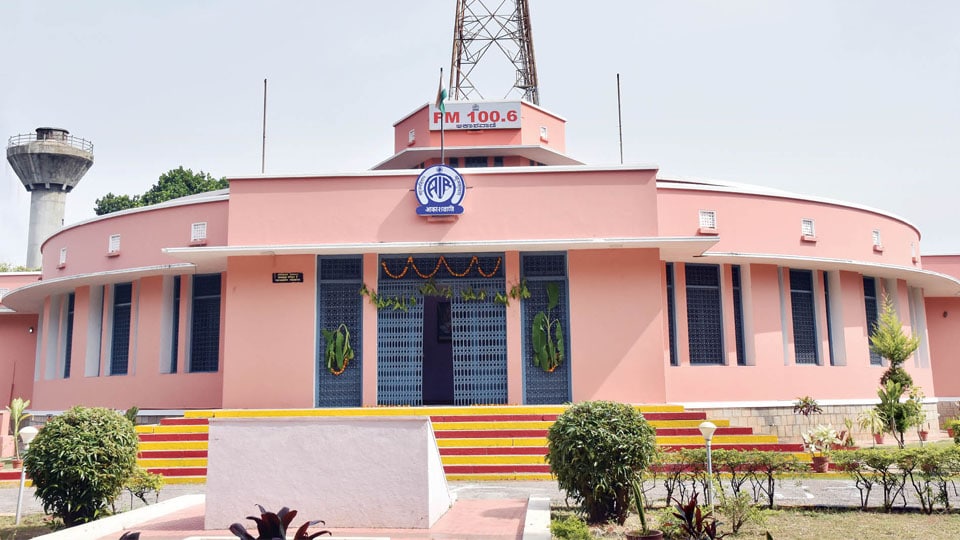 Connecting with my grandfather Dr. M.V. Gopalaswamy who founded Akashvani

As a child and a teenager, I often clandestinely tuned in to All India Radio (AIR) when I was supposed to be studying. When the announcer said “Yeh Akashvani hai”, it was so exciting because it meant that my favourite songs would follow.

At home, I often overheard family discussions around a long-departed grandfather having been associated with Akashvani. The facts about him are available on Google and the website of All India Radio and don’t need to be repeated here. I want to talk about my very personal association with his memories.

It is difficult to write about a grandfather, who was gone when I was merely two-years-old. What I recount here are sepia-toned memories about Dr. M.V. Gopalaswamy (MVG), who founded Akashvani, collected through photographs and stories narrated by my grandmother,  parents and other relatives.

I had also been increasingly prodded by an inner urge to know him better so I turned to the few sources I had — family lore and legend, Google and old Mysore families who knew him or about him. In my quest to know more about him, I sought out and spoke to some of his illustrious students. Late T.S. Satyan, late Prof. U.R. Ananthamurthy and late R.K. Laxman are some of the names that come to mind.

What emerged is a portrait — of a man born in 1896 in the present day Tamil Nadu (then Madras Presidency), graduating from Pachiappa’s College and going on to do a Ph.D in Psychology under Dr. Charles Spearman in University College of London.

He earned his Ph.D but not before a huge setback. His Indian degree was not recognised in the UK and he had to start over by getting a new bachelor’s degree. On his return from the UK, he established the second oldest Psychology Department in the country, at the University of Mysore in 1924. It was thus that the Royal State of Mysore became home to a Tamilian who spoke no Kannada at all, and yet, grew to love Mysore so much that he insisted his children grow up speaking Kannada.

His association with radio however, virtually eclipses all else that he did. Google throws up images of Vithal Vihar, the beautiful lime-washed, rented house in Mysore, from where he established India’s first private radio station in 1936 with his own funds. The little stories that are linked to his big initiative bring alive the struggle associated with the setting up of his home-grown radio station. It is debatable whether he envisaged he was starting a revolution of sorts.

Family lore is that Dr. MVG (as he came to be known) along with his friend, radio technician Jagdish, had been experimenting with the medium of radio for some time. He then acquired a transmitter with the thought of establishing a private station, with scarce a thought that the money he was spending might have served to fulfil the needs of his growing family.

READ ALSO  Music in the AIR

While setting up the station, the erection of the antenna posed problems as the pole was 60 ft. in height and the antenna had to be fixed at its very tip. The problem was solved by Malla, MVG’s Man Friday who clambered up the pole and tied on the antenna.

My grandmother Kamala Pati never tired of telling me about her husband trying to persuade their first son, my father, who was around 10 at the time, to sing Baa Baa Black Sheep into the mike. He apparently dissolved into tears because he forgot his lines, so nervous was he! A ten-year-old singing Baa Baa Black Sheep! How innocent were those days.

Jnanpith Award winner, late Prof. U.R. Ananthamurthy, who was a student of Dr. Gopalaswamy at Maharaja’s College, Mysore, said to me during a conversation, “Realising that receiver sets which cost about Rs. 300 were unaffordable for the masses, he arranged for receiver sets to be installed at Parks in Mysore city. These were connected to loud speakers so that citizens of Mysore could listen to the programmes. I remember going and sitting in these ‘Radio Parks’ as a student to listen to music.”

MVG ran the station with no grant or assistance for several years.  During this period, artistes received remuneration in the form of upma and coffee. Women artistes were also given tamboolam.  The artistes were transported to and from the station by tongas. It does not take much to imagine the sacrifices this must have entailed, considering MVG had a young family to nurture.

Owing to his position as Professor of Psychology in Maharaja’s College, MVG enjoyed the goodwill of teachers, students, educationists, artistes, citizens and people from the administration.  He was therefore able to get together an enviable set of speakers to address listeners on various topics through his station.  The focus he placed on programmes in Kannada has been especially appreciated.

In 1939, after the commencement of the Second World War there was a demand for news through the radio.  It is then the Mysore City Municipality recognised the need to support the radio station with a modest yearly remuneration.

In a very interesting account of Akashvani’s focus on news, Dr. H.K. Ranganath recollects that he was chosen to be a newsreader based on a speech he had read out on Akashvani quite by chance because the person originally chosen had fallen ill.  MVG had heard his speech and immediately made him an offer to become a newsreader at a salary of Rs. 20 per month. N. Kasturi would listen to BBC, read the day’s papers and collate news and prepare the bulletins which were read out by Dr. Ranganath thrice a day.

Etching his footprint across a wide canvas

I learnt as time went by that my grandfather was not about radio alone. Dr. Gopalaswamy is known to have had multifarious interests — Psychology was his profession, but he took in radio, early childhood and adult education and sports, particularly tennis — all on a normal working day. Wide canvas that. So does one call him a rolling stone? The answer to that is a resounding no, because each of his interests was deep and sustained and he did pioneering work in each field, establishing institutions which are alive even today.

MVG has left some very solid footprints on the development of Mysore, which also had wide-ranging impact for India. While he was deeply involved in higher education, Shishu Vihar, the school he set up especially for pre-schoolers recognised that early childhood education was equally important. It proudly carries his name even today and is called Gopalaswamy Shishu Vihara and is located on the road that has been named after him.

He went on to become Principal of Maharaja’s College and late Prof. Ananthamurthy recounted to me, “Dr. MVG was loved by his students and his presence was felt rather than heard.  He was so unassuming that I have seen him coming out of his office to ring the bell if the peon forgot.  He solved problems through participation rather than by imposing the powers that were vested with him.”

Glimpses of a father

MVG believed that children learnt more when they least knew they were being ‘taught’. So when he was working at NIMHANS (Mental Health Institute back then), on days his little 6-year-old son M.G. Rajanikanth didn’t want to go to school, he simply took the boy to work with him. He silenced his wife’s protests by saying that the child could learn much more by observing his father at work!

And yet, he was far from being an indulgent father. His children, including my father, loved, feared, adored, looked up to, admired, even idolised in turns, but didn’t take advantages with him. I also heard stories of this patriarchal figure (which was not a negative word back then) who was kind and sensitive; he was the father always good for an ice-cream treat, but you didn’t go to him for a ‘cuddle session’; he was a father whose lap you didn’t climb into because he was eternally reading (even when he was treating you to ice-cream), and the book he held came between you and him.

Appa, teacher, radio pioneer and psychologist — people who were fortunate, got to see all these sides to him. Fate willed that he went away before I got to know my grandfather. But stories of him still humble me and make me proud I am connected to him. I have now relocated to Mysore to dig deeper and find him. Tatha, I’m here to resurrect you !