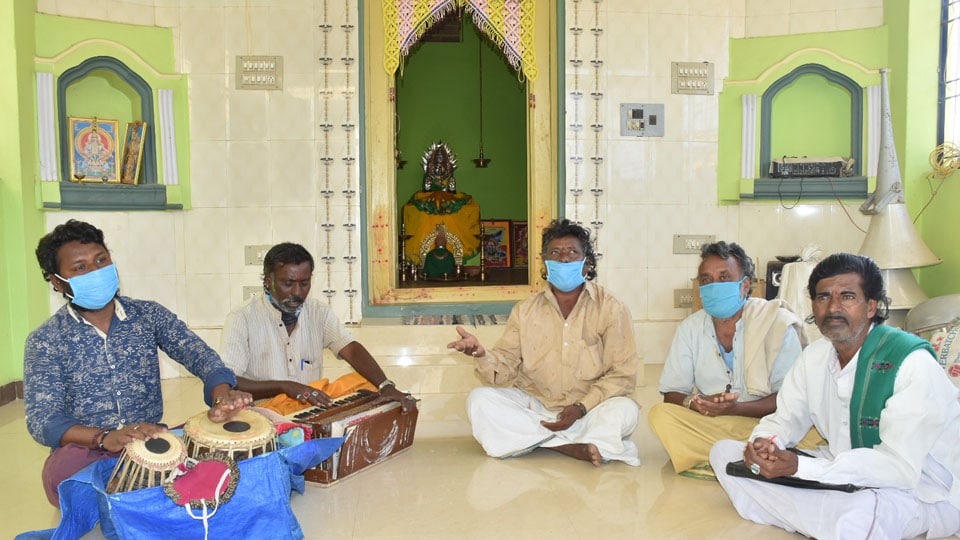 Itinerant performers or ‘sadhus of the cemetery’, these Budaga Jangama artistes struggle to make ends meet

Mysore/Mysuru: How many days since you last stepped out of the house? Got stuck in a traffic signal, saw a movie in a multiplex, went to a restaurant or went shopping on Devaraj Urs Road or at a Mall? Started reminiscing those days already?

For a person who can afford all these luxuries, that is what he tends to think about first amidst this lockdown due to the COVID-19 pandemic. But there are many other people whose only worry is how to make ends meet and feed the family. And the worst hit are tribal communities, folk artistes, street artistes, etc.

Many of us would have seen a saffron-dhoti clad Rama with his bow and arrow in hand, along with Sita, Lakshmana and Hanuman with a tail on his back or a blue-bodied Krishna presenting Gitopadesha, a Trishula-wielding Shiva, Yamaraja with his Gadhe, Hidimba, Ravana, Shurpanakha and many others wandering the streets, visiting shops, going door-to-door, begging for money.

Who are they exactly? They are the ‘Hagalu Veshadhaarigalu’ or ‘Bahuroopis’ belonging to the Budaga Jangama community, whose profession is to don these roles, look the part of a celestial being and roam the streets of the city begging for money and food.

Hagalu Vesha is a daytime performance. Hagalu Veshadhaarigalu are people who wander the length and breadth of any particular place, hardly spending any time at home. They are the people of many forms — Rama, Basava, Maruti-Anjaneya, Parmatma — they become them. They are ‘Bahuroopis’: Bahu meaning many and Roopi meaning forms. They wear costumes, tell riddles, sing, and in the end they ask for money. They have been engaged with sangeet kala (art of singing) since ancient times.

They are itinerant performers and are also known as the ‘sadhus of the cemetery’. They impersonate mythological characters and stage amusing episodes that also comment on daily events. Largely, only male members of the community perform the musical traditions that have been orally passed down and nurtured within specific families of performers.

Originally from Srisailam Mutt in Andhra Pradesh, these Budaga Jangama artistes, whose deities are Sri Mallikarjuna and Yellamma Devi, came to Mysuru many generations ago and made it their home. Around 15 such families reside in huts at Yellamma Colony in Bannimantap. Although their native language is Telugu, Kannada is now their language. Whatever money these community artistes earn, they share it amongst everyone in the neighbourhood and eat and live together.

The Coronavirus pandemic which has brought the entire world to a somewhat grinding halt has had its ill effects on everyone. In a nation like ours which is known for its cultural richness and diversity, the worst hit are folk artistes and such tribes including the Budaga Jangama artistes. With no shops open in city and strict enforcement of lockdown, all the artistes are forced to stay at home, making it difficult to feed their families.

One of the senior Budaga Jangama artiste, Dodda Jayaram, speaking to ‘Star of Mysore,’ said, “Earlier, during the times of Maharajas of Mysore, our community had so much respect and love. People, especially children used to follow us while we toured the city in our costumes during Dasara. We used to entertain hundreds of people during Dasara. Even stars like Dr. Rajkumar and J. Jayalalithaa had seen us perform and had appreciated our art.”

“Children and the elders alike were in awe of our appearance and revered us since we dressed up as Gods. They gave us food along with money. But now with the advent of television and mobile phones, most of the younger lot do not even know about our existence. With changing times, we have lost the respect people had towards us and our ‘Hagalu Vesha’. We struggle to earn money and hence have no choice than to beg, we need to survive too.”

Another artiste, Sanna Jayaram said, “Now, we go anywhere there is a demand, even if they are musical programmes or some events. Shop owners give us around Rs. 10 to Rs. 20 when we visit their shops. We don’t demand more ever. Our children need food, clothing, and shelter. Let this ‘Hagalu Vesha’ culture end with us. I don’t want our children to carry on this tradition since there is no future for us or them. We want our children to go to school, get  good education and find suitable jobs later on. Hope they have a better life than us.”

Life comes to a standstill

“When we tour the villages, we create a makeshift shed outside the village, put on our costumes, put on the makeup and then go inside the villages. With sincere appreciation from the villagers, we present our shows at various events there and take whatever remuneration they give, we don’t demand anything more,” says Dodda Jayaram.

“Since more than a month, after the lockdown was announced, we haven’t even worn our costumes. Life has come to a standstill. Some organisations or individual donors give us some food. That is our only means of survival. The Government has done nothing for our community. We need some recognition and remuneration from the Government too,” says B. Ramanna, artiste.