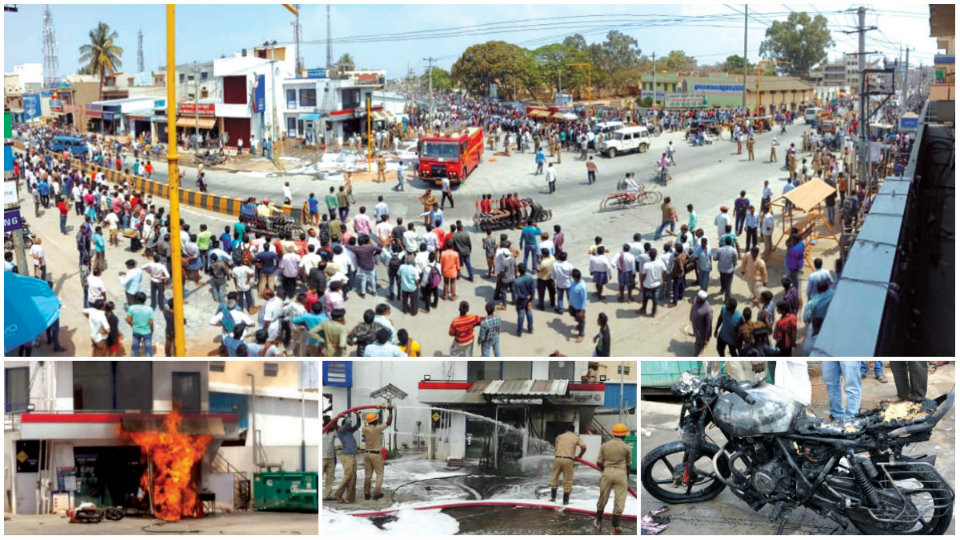 Chamarajanagar:  Tension prevailed for sometime at Bhuvaneshwari Circle here yesterday, when a petrol pump caught fire resulting in a couple sustaining injuries. Luckily, as there was a Fire Brigade Station nearby, the Fire and Emergency Service personnel rushed to the spot immediately and doused the fire, thus preventing the fire from spreading further and causing more damage.

The injured couple is Police Constable Vasanthkumar and his wife Pallavi. They have been admitted to the District Hospital for treatment. Fortunately, their two children Punarvi and Poorvika, who had come with their parents, have escaped miraculously. But the bike was completely charred in the incident.

While the pump attendant was filling petrol to the bike, fire was noticed in the pump and within seconds the fire spread to the bike, resulting in all the four falling from the bike and fleeing from the spot during which Vasanthkumar sustained burn injuries on his leg, while his wife sustained injuries due to a fall while fleeing. Luckily, their children escaped the fire miraculously.

The couple was immediately shifted to the District Hospital, where they are undergoing treatment. Meanwhile, Fire and Emergency Service personnel from the Fire Brigade Station, which is close by, rushed to the spot immediately and were successful in dousing the fire, thus preventing the fire from causing further damage. The fire dousing  operation lasted for about 30 minutes. The reason for the fire is yet to be known.

Traffic was disrupted for some time on the Highway, where the petrol bunk is located. Chamarajanagar Police have registered a case in this regard.